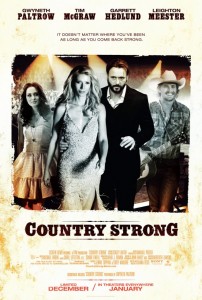 The scene, as I envision it, is a cold December night in 2009. Gwyneth Paltrow, having just put a fussy Apple down for the night, is curling up on the couch with an advance DVD of Crazy Heart; the sort of privilege provided by movie studios to the famous and entitled. Even then, Jeff Bridges’ tour de force performance was earning Oscar buzz. And, as the movie reached its apex, Ms. Paltrow bolted upright, called her agent and said, “Get me one of those, except, you know…for a girl.” And thus Country Strong was born in which Paltrow plays Kelly Cantor, a wildly famous country superstar. As the film opens we find her in rehab for alcohol addiction where she has struck up a relationship with an orderly (Garrett Hedlund) who just happens to be an aspiring country musician. It’s an otherwise touching romance that’s disrupted only by the existence of her manager/husband James (Tim McGraw). Oops.

When a film clearly designed to be “Oscar bait” is released in January, thereby making it ineligible for this year’s Academy Awards, you know there’s going to be problems. And Country Strong doesn’t disappoint. Or, rather, it does disappoint. Whichever one means it’s bad. Paltrow’s portrayal of Kelly (think the success of Faith Hill mixed with the self-destructive streak of Amy Winehouse) is the sort of histrionic performance for which The Razzies where invented. In her hands the character, intended to be complex but ultimately sympathetic, becomes a vapid, narcissistic, utterly unlikable and completely unsympathetic head-full-of-crazy.

The film positions itself as a behind the scenes look at the world of country music but it seems to know nothing about the industry it purports to portray. Kelly and her husband are staging a “major comeback tour” after a mysterious incident in Dallas immediately followed by her stint in rehab. She’s playing arenas but her “major comeback tour” consists entirely of three dates played within the same state over the course of what feels like a month – a not very cost effective way of touring. And each date seems to call for an entirely different stage set. And why in the name of country and/or western would they cast real life superstar Tim McGraw as the only major character in the film who doesn’t sing?

Kelly and her husband take turns caring for a wounded quail that she rescues from the woods while at rehab. They spend the remainder of the movie taking turns caring for the creature in a manner so ham-handed I half expected them to name the bird “Metaphor.” The dialog is wooden and riddled with clichés. The film’s futile attempts at pathos are as likely to elicit laughter as they are tears. And the songs are, for the most part, completely lifeless. The entire affair is overly earnest and ends on a note so ridiculously maudlin that it borders on comical. In the end, the film just might do for country music what Showgirls did for strippers.