Sam Rockwell is Excited About “Cowboys and Aliens” 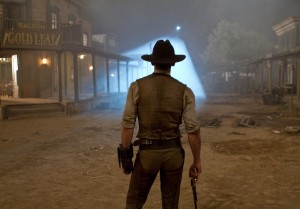 Sam Rockwell is an outstanding actor.  His performance in Moon was Oscar worthy, and he was my favorite part about Iron Man 2.  Not many of people have talked about it, due to the fact he only got a brief shot in the teaser, but this summer he will be starring alongside Daniel Craig and Harrison Ford in Jon Favreau”s upcoming film Cowboys and Aliens.  The man recently talked about the film, and says that it will be much more serious than people are expecting.

“Let me tell you, this is going to be a fun movie. I think we pulled it off; it’s a mix of genres. I think because of the title people think it’s a comedy, and it’s not — it’s like UNFORGIVEN meets CLOSE ENCOUNTERS.”

“I don’t think it’s really been done before, the only thing I liken it to is a movie like FROM DUSK TIL DAWN — it seems all very ‘cops and robbers’ and all of a sudden there’s vampires. It’s like that, in that you have a very formulaic western and then all of a sudden there are monsters. It’s played very real.”

I am very excited about this project.  I think Favreau has earned the respect to at least be interested in what he is up to, and the cast is certainly intriguing.  I think that it is really going to surprise audiences and be a big hit this summer.

Are you excited about this project?  Which is your favorite actor Craig, Ford, or Rockwell?  Let us know in the comments below.