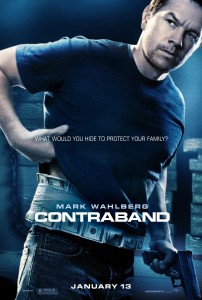 I think it says something about the new Mark Wahlberg vehicle, Contraband, that I keep forgetting its name.  What is it again?  Contraption?  Contraception?  In the end, I made up a trick to remember: an image of Mark Wahlberg wearing a new ultra conservative brand of Ray-Bans while he steals piles of money.

Unfortunately the film is as forgettable as its title.  It stars Wahlberg as Chris Farraday, a former super-smuggler turned regular, boring guy; he has a wife, Kate (Kate Beckinsale)—a character so underwritten they forgot to give her a name—and two kids, as well as his own small business installing home security systems.  His best friend, Sebastian (Ben Foster), has similarly turned his life around post contraband-land—we see him early on in an AA meeting—and he’s nearly as protective of Mark’s family as Mark.  Kate has a brother, Andy (Caleb Landry Jones), caught up in the business of smuggling, so young and innocent looking I had a hard time believing he could be involved in anything as delinquent as cocaine.  When he has to dump his package of drugs in the ocean to avoid arrest, his crime lord employer, Tim Briggs (Giovanni Ribisi), demands he pay up for the money lost or risk having a bullet shoot him dead.  Of course, Mark gets involved at barely a bequest from his wife and throws all of their lives into a virtual Russian roulette.  But to him the process is simple: Book passage on a container ship, go on a smuggling job (no drugs, only counterfeit bills), bring home some contraband, get paid, and before his family can sustain too many head wounds send the satisfied bad guy on his way.

Director Baltasar Kormakur starred in the original version of Contraband, a 2009 Icelandic film titled Reykjavik-Rotterdam (swapped for New Orleans and Panama), so he is certainly close to the source material, perhaps too close.  At times the plot feels watered down, almost as though there were translation issues with the script.  Any attempts at humor are even more ridiculous as Wahlberg’s Chris is given what are supposed to be quips, but lack any punch.  In one scene, Chris and his posse walk through the warehouse of a crazy dealer named Gonzalo (Diego Luna) who has a wolf watching idly from a cage.  The dialogue exchange is as follows:

Maybe some people are fooled by that witless, bad boy charm, but American audiences deserve real jokes.  It would have sufficed for him to address the wolf directly, an obscure allusion to a certain SNL sketch.  My demands may be too high.

I mentioned the entourage already, but I would like to reiterate how underdone they are as well.  Where most of these heist movies introduce the supporting players with sophisticated databases that list off strengths, talents, and BMIs, along with a full color photo, this movie shows us a list of names in a Word document.  Along this line, numerous scenes felt completely unnecessary.  Writing students are often taught that every scene should be advancing the plot, which means that phone calls between Chris and his wife saying they love each other and to “be safe” at some point become redundant.  Though in his defense, Kate does spend the majority of the film getting her bleach-blond head slammed against fists and mirrors.

All of that said, Contraband was not without its good qualities.  J.K. Simmons plays the likeable, snarky captain of the ship on which Chris hitches his ride, and he takes advantages of his few good lines.  What scenes are meant to be suspenseful manage to build tension effectively, especially one involving container searches.  I did begin to wonder whether any of the cargo was legitimate with so many shipmates involved in illegal activity.  With these smugglers on their cell phones to their wives all the time, it’s amazing drugs have managed to prosper in this country at all.