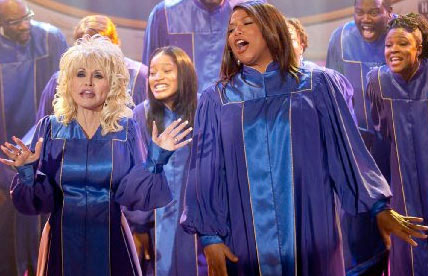 Dolly and Queen sing their boobs out in "Joyful Noise."

Most people know that a flick featuring sassy women, spontaneous songs and plenty of jazz hands is my idea of fine cheesy heaven. So why did Joyful Noise make me feel like I ate off-brand Cheez Whiz instead?

The character outlines (or as much as I can remember of them, because they weren’t very memorable) will surely tempt you to see Joyful Noise:

Queen’s Daughter (some girl) – Obedient 16-year-old…UNTIL THE BOY. Star of the choir. Makes “Glee” faces while singing. Loves Jesus. Has daddy issues. Has mommy issues. Knows how to sexydance without ever having encountered sexiness. Forgets that her brother is in the movie.

Dolly’s Grandson (some boy) – Rebel without a point. Moves in with Grandma because Mommy hates him. Gets starry eyes when Queen’s Daughter sings. Sees choir as roadmap into Queen’s Daughter’s pants. Doesn’t care much about Jesus. Becomes BFF with her forgotten brother. Loves butts.

Dolly Parton’s husband dies because he rightfully wants out of this movie. Dolly wants to flaunt her assets (the monetary ones) and take Dead Husband’s place as choirmaster for Ethnically Diverse Church. The pastor says “Uh-uh, girlfriend, that role was made for the Queen, and she’s going to give us the championship at the big I Love Jesus So Much That I’ll Sing And Dance For Him competition.” Queen can’t get much enthusiasm out of her choir members, including her virginal daughter, who just wants to sing pedo-Michael Jackson songs to Jesus.

Dolly’s Grandson comes to town, has eye-sex with Queen’s Daughter from across the church, and decides to join the choir to be near her. Queen’s Son cries about Asperger’s, but no one really pays attention. Dolly and Queen trade ridiculous idioms and proverbs to prove how much they hate each other and how much they love Jesus. Everyone sings a lot. People make sex and butt jokes (though not at the same time, because Jesus might not approve). Stuff happens. More stupid stuff happens. The big I Love Jesus So Much That I’ll Sing And Dance For Him competition takes place. The end.

Seriously, this movie was made – MADE – for the Hallmark Channel, not the big screen.