Compliance is the second film and first major release from writer/director Craig Zobel. It dramatizes the true account of a fast-food manager’s phone conversation with a police officer and his request that she strip search a young cashier in response to a theft. For those that may not know the true story of this incident (and at least 70 other similar incidents) this film is focused on the psychology of obedience and the ease with which people can be convinced to perform almost any task. Watching Compliance may remind viewers of Stanley Milgram’s electroshock experiments of obedience or Phillip Zimbardo’s Stanford Prison Study where students playing roles in a fake prison soon escalated to psychological and violent physical attacks. 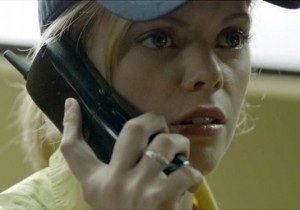 Compliance is not an easy film to watch. It opens with the fairly relatable and mundane life of a fast food restaurant where workers are buzzing about the latest gossip and stressing over their latest shortage of bacon and pickles. Almost immediately, we’re introduced to a number of characters and begin to understand some basic forms of motivation. The middle-aged female manager, Sandra (played by character actor, Ann Dowd) is seemingly concerned with proving her worth and there appears to be a rift, possibly even jealously between the manager and an attractive teen cashier, Becky (Don’t Trust The B’s Dreama Walker).

Soon enough Sandra receives the phone call from Officer Daniels (Pat Healy) and we’re thrust into 90 minutes of disbelief. Since the film’s debut at Sundance a year ago, film circles have debated the plausibility of such events. Notoriously, one audience member at Sundance even walked out of the screening stating “Give me a fucking break.” Compliance is a hard film to watch, but is arguably one of the most engaging films of the year, inviting it’s viewers to start a discussion and investigate the true account of what actually happened.

One could make the argument that within the structure of the film, Craig Zobel doesn’t give the audience enough knowledge of the characters to latch on to, but perhaps that’s a good thing. With less known about the characters, the audience is less able to attribute their decisions to specific personality characteristics rather than the characteristics of people in general. The victims in these cases may have had certain commonalities, but Compliance is ultimately a sociological study, interested in bigger questions.

While Compliance may not be an enjoyable film or a film I’d necessarily want to see again, I’d venture to say it’s a good film. It evokes emotion, invites conversation and is certainly memorable.

Compliance is currently available to stream on Amazon, iTunes, VUDU and YouTube for $3.99.

P.S. – Don’t watch this movie with your kids…or your parents…or on a first date.