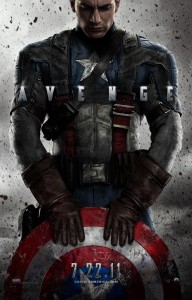 Marvel wraps up its long and winding road towards The Avengers with Captain America: The First Avenger. The subtitle is apt (though bit of a cynical hedge against foreign markets) since Captain America is the leader (and heart) of the team. Set in 1943, Steve Rogers is the quintessential 90-pound weakling when he is selected by the U.S. Army’s Strategic Scientific Reserve to be given their top secret Super Soldier Serum (The Army apparently really likes alliteration). The program is intended to create an army of perfect physical specimens who will wage war on Nazis. America prefers to achieve their “master race” through chemicals not breeding. Admittedly, it’s a somewhat tone-deaf way to teach people about the errors of racial superiority.

The film continues the Marvel tradition of selecting directors that are uniquely suited for the character at hand. Jon Favreau (Swingers) tackled the fast-paced dialog of Iron Man whereas Kenneth Branagh (Hamlet) handled the faux-Shakespearian Thor. Captain America, set largely in the 1940s, is helmed by Joe Johnston, the man who gave us the underrated, and similarly time-framed, The Rocketeer. Having the film take place during World War II proves to be brilliant move. Captain America, by his very nature, is a spokesman for nationalism. After all, he literally wears his patriotism on his sleeve…and his chest…and his head…and his, well, you get the idea. His every utterance is a potential political landmine as it could be perceived as, either intentionally or inadvertently, endorsing one ideology at the expense of another. But setting the film against the backdrop of what Studs Terkel called “The Good War” depoliticizes the character without castrating him. While we might be a polarized nation we can, thankfully, all still agree that Nazis suck.

As the 5-foot/90-pound incarnation of Rogers, Chris Evans undergoes a CGI’d Benjamin Button-fication. The effect is impressive though at times off-putting. Even a well-done magic trick still leaves you focused on how it was done and that can prove distracting. But Evans is believable as both versions of the character and carries the film by capturing Rogers’ intrinsically unassuming humility. It’s this modesty that allows him to be a patriot without veering into jingoism. His loyalty manifests itself not as doing what his country tells him, but by doing what’s right on behalf his country. It’s a subtle but important distinction. Granted, the film never truly puts his resolve to the test in this regard but is that really what you want out of popcorn movie?

When it comes to his powers, Captain America is one of the weaker superheroes. He doesn’t fly, he’s not bulletproof and he doesn’t have super-speed. He’s not “super” as much as he is “peak human performance.” Ultimately, his “superpower” is perseverance. The end result is a film that’s a throwback for more reasons than merely the era in which it takes place. It’s a good old fashioned, swashbuckling adventure film. And, more importantly, it’s well done. Like Iron Man and Thor before it, the film realizes the importance of taking a break from the action in order to develop its characters and it benefits greatly from this knowledge. The film is a retro, fun-filled action film that sets the stage quite nicely for the next chapter. Avengers assemble, indeed.