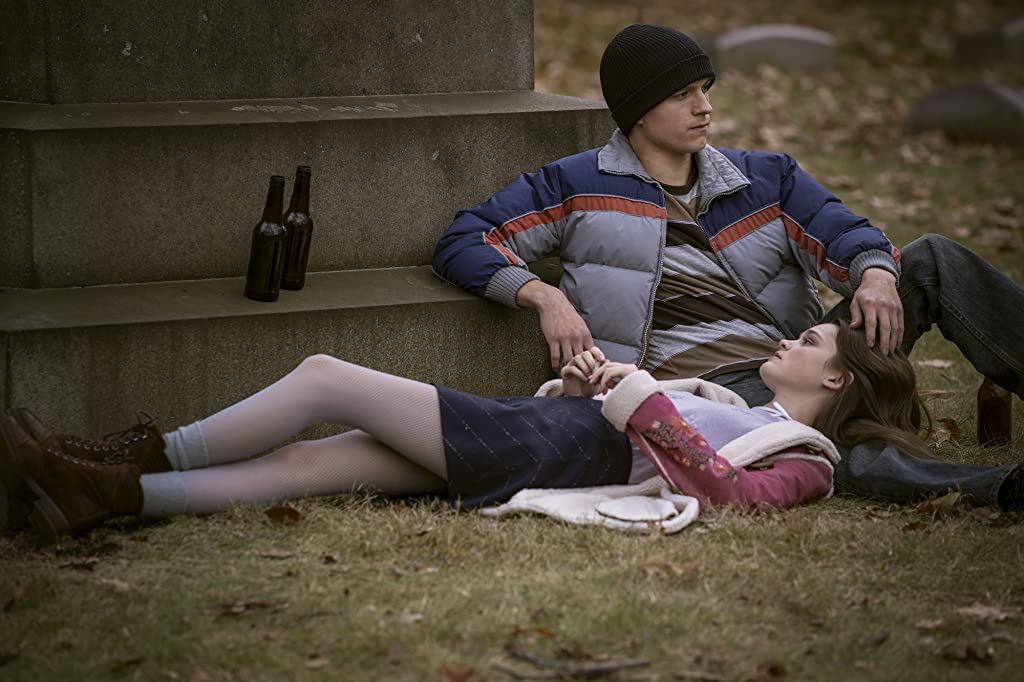 Coming off their massively-successful achievement of Avengers: Endgame, the Russo Brothers (Joe and Anthony) release their latest film to Apple TV+ on March 12.

Cherry, based on the 2018 novel of the same name by Nico Walker, follows the titular character (based on Walker’s real-life experiences) as he navigates his life pre and post-military service, eventually becoming dependent on drugs and committing crimes to fuel his addiction. The film runs 2 hours and 20 minutes long, and is broken into chapters chronicling major life events of the main character. Unfortunately, it feels much longer, and the tonally-imbalanced film never seems to find it’s footing.

That is not to say that Tom Holland doesn’t give a terrific performance, even if miscast for the role. The actor proves why he is an A-list movie star, and does some of his finest work here. It’s just a shame that it wasn’t in a better film. If a lesser actor had been cast as Cherry, it might have been a complete disaster. So at least there is an interesting performance at the forefront of the story. Holland is really good at what he does, and this is his most mature role to date. On the downside, it’s often hard to get past his youthful exterior. They try to age him up throughout the film, even going as far as to give him a ridiculous-looking mustache at the end to show how much older he looks now. And you guessed it – it looks like high-schooler Peter Parker in a mustache.

Ciara Bravo also does some excellent work opposite Holland as his girlfriend, as we watch the two of them go through rather troubling times. The relationship is reminiscent of Jared Leto and Jennifer Connelly’s characters in Requiem For a Dream, a superior film handling the struggle of drug-addiction (although not used to cope with PTSD as seen in this film). They have a good chemistry, and share some touching scenes together. Neither of them are the problem in the film, but can’t do enough to save it either.

The film features a solid supporting cast, including Jack Reynor as Cherry’s drug dealer, Forrest Goodluck as one of his friends and drug-addicted accomplices, and Jeff Wahlberg as one of his closest friends in the military.

One of the biggest issues is that the script feels messy, making it difficult to come together as one cohesive narrative. The way it bounces around, and the stylistic choices, lack what it takes to make it feel personal. The novel is based on Walker’s life, and should feel like an intimate retelling of his fascinating story. However, it often feels too flashy to allow any real connection to the characters. Often throughout the film, Cherry will turn and talk to the camera – a unique choice that I really enjoy when used properly – but just feels out of place in this film. He does it, and then we go long swaths without it. Sometimes Cherry is narrating, sometimes we are just watching. It’s all over the place.

The film does capture the horrors of war quite well, and there are some truly harrowing scenes put to film. There is no question as to why the main character is dealing with PTSD, and millions of others are suffering from similar issues. The story is very large in scope, and tries to pack it all into under two and a half hours. It feels like something that would have been better served as a limited series, or perhaps could have focused more on specific chapters – like war, or post-war addiction / criminal life. Yet, when it is all mashed together, it ends up feeling jumbled.

The Russo Brothers are talented directors, and have proven themselves more than capable for handling large action set-pieces and bringing multiple characters together. Unfortunately, the Cherry comes across as them trying too hard to prove they can do more than just superhero films, and their artistic choices come across more sloppy than impressive. Strong performances and a fascinating story keep the film from being a complete failure, but aren’t enough to save the ambitious directors from being left to their own devices.

Cherry is available on Apple TV+ with subscription starting March 12.