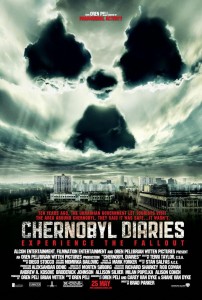 Chernobyl Diaries is a horror film that has hung its entire marketing campaign on Oren Peli, the man behind the Paranormal Activity franchise. Peli receives top billing even though he is only the producer, but based on how much money those films about doors opening and closing have made, there is a good chance “From the creator of Paranormal Activity” is all audiences will need to hear.

The movie is about a group of tourists in their twenties traveling from Kiev to Moscow who get sidetracked by their own curiosity when they find out about something called extreme tourism. Uri, a former soldier, is a tour guide who specializes in taking tourists to places that most wouldn’t dare to explore. Because it seems like it will leave them with the best story to tell at parties, the group decides on a day-trip to Pripyat, the still radioactive town where all of the Chernobyl workers and their families lived until they had to abandon it overnight after a nuclear reactor meltdown in 1986. After a two hour drive, Uri is told by military personnel at an entrance checkpoint that the town is off limits and he must turn the van around immediately. Thanks to our tourists being especially white and whiney, Uri decides that going into town illegally through a hidden path is more important than giving out refunds. It would seem that the main theme of the first half of the film is to show how much it must suck to be a tour guide to Americans in a foreign country.

For a movie whose main character is a location, it is quite fascinating to see the ghost town that is Pripyat, which is good since this is a slow burn type of film. It takes quite a while for things to start moving in the shadows, but the tension is always palpable due the limited amount of time someone can breath the air before the residual radiation starts making them sick. This movie could have been made by anyone, starring anyone, and it probably would have worked because Chernobyl is so creepy and synonymous with death and loss.

Though perhaps unnecessarily, the acting is good, especially by teen pop icon Jesse McCartney who has been acting since he was 4. The dynamic between the characters is believable and in the beginning, even humorous. Unfortunately, as the tension ratchets up, the witty back and forth jabs devolve into constant name yelling–“Paul! Chris! Natalie! Paul! Marco! Polo!”

When I went into the theater I had no idea what the monster would be or if there would even be one. I was trying to guess by incorporating storylines from other movies like 28 Days Later, Silent Hill, Quarantine, and The Hills Have Eyes, which in turn made me even more afraid of what was chasing them. Less actually turned out to be more thanks to my imagination. It was almost a bit of a let down when the real threat became apparent because what I had in my mind, a government created zombie monkey virus unleashed onto rednecks, was so much worse.

What really helps make Chernobyl Diaries more tolerable than Paranormal Activity is the cinematography. The movie starts out by teasing the audience with shaky camcorder footage of our tourists traveling around Europe, but the moment audience members might start scrambling for their barf bags in case sea sickness kicks in, the movie switches to professional steady cams. Pretty much every shot uses natural lighting in close quarters which makes everything feel that much more real.

Chernobyl Diaries is a straight forward horror film that takes the tried and true formula of kids going where they shouldn’t and sets it in a location that trumps every haunted house ever created. It may be predictable and the ending is a little unsatisfying, mostly because it raises so many more questions than it answers, but when you are in that dark theater, you will feel like you are an extreme tourist yourself.