I’ll admit I have a bit of a soft spot for the Men in Black franchise. When the first film came out, Will Smith was still a huge asset in Hollywood (not that he isn’t now), and he was clearly a headliner for summer blockbusters. Cue summer of 1997, the summer before I entered eighth grade with my group of best friends. We used to go to movies all the time, and Men in Black was the perfect movie for us to meet up and hang out. We were getting ready for our last year together, as I was going to head to DeSmet, while most of them were heading off to Rosary (Trinity) and knew we wouldn’t be hanging out as much. We’d still hang out every now and then, but we were drifting apart, and by my senior year I hardly, if ever, saw them. Men in Black II came out a few years later and while I enjoyed it, it just didn’t have the same feel as the original.

Forward to 2012 and the release of the latest chapter in the MiB franchise. Ten years after the release of the second film, it seemed like this movie was in production limbo for an eternity. After some production issues, it finally got rolling a few years ago, and I’m pretty happy to say that it’s much like its predecessors: full of action, comedy, and just plain fun. I really wish Will Smith would have done the theme song, though.

The film opens in the present-day, when Boris the Animal (Jemaine Clement) escapes from Lunar Max, a prison set up on the moon to hold intergalactic criminals. Boris is the last of an alien species that essentially leeched planets, and 43 years ago Agent K (Tommy Lee Jones) shot off his left arm and saved Earth from an invasion, choosing to arrest Boris instead of kill him at the time. 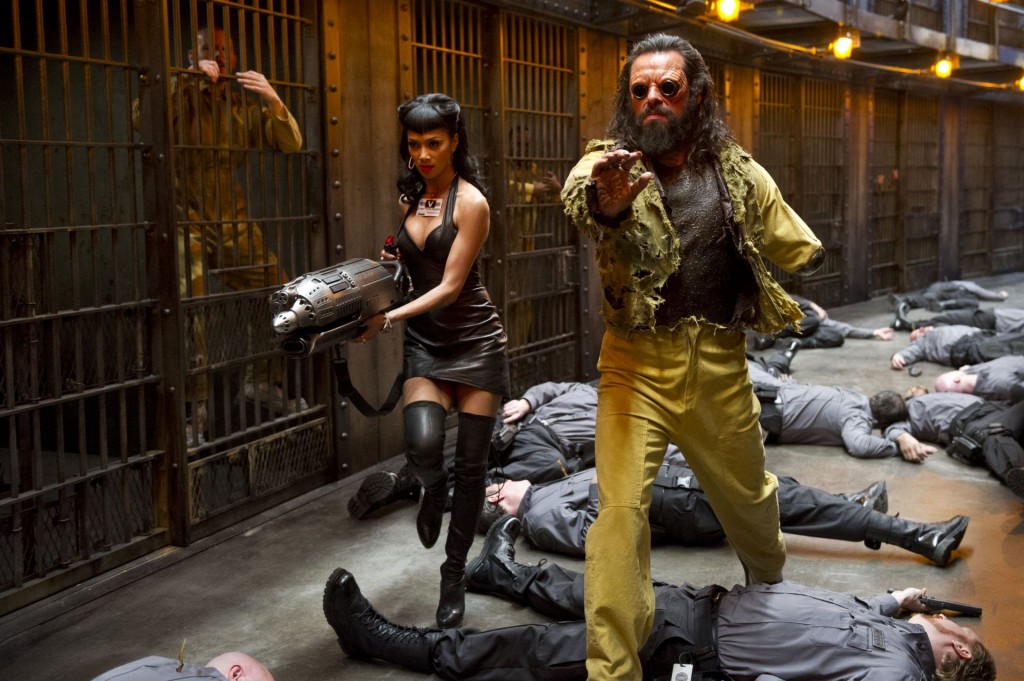 After investigating a case of alien intestinal worms at a Chinese restaurant, J (Will Smith) and K discover that Boris has escaped and is on Earth. K is his usual stoic self, refusing to talk about what happened in the past, much to J’s frustration, who has wanted nothing more than to be a little closer to his partner. J recognizes K’s hesitance to discuss the matter as well as his relationship with O (Emma Thompson), the new head of MiB after the passing of the previous chief, Zed. K also hints at a past that involves J’s father, whom J never knew very well. That night, K thinks Boris is coming after him and prepares for the final encounter.

The next morning, J heads to MiB headquarters to discover that nobody’s heard of K and he has a new partner. He and O discover that Boris has interrupted the space-time contiuum and traveled back to 1969 and killed K. To stop this, J gets a time jump device and travels back to the day before K is killed, which happens to coincide with the launch of Apollo 11, the first mission to send men to the moon.

After earning his trust, J discovers the younger K (Josh Brolin) is much more laid back than his older counterpart and that his feelings for O (Alice Eve) are more than platonic. J and K team up with Griffin (Michael Stuhlbarg), an alien with the ability to see different versions of the future depending on which universe they’re in (more on that in a bit), to stop Boris and launch the ArcNet to prevent an alien invasion that would ultimately destroy Earth.

For a film that had so many issues during its production, the execution is surprisingly good. The plot of the film came from a conversation Smith and director Barry Sonnenfeld had during the filming of the second film. In order to take advantage of an expiring tax break, filming in New York had to commence in 2010 before a full script had even been written. Production for the film cost $215 million; coupled with the marketing and distribution costs, it’s estimated the studio spent $375 million total, making it one of the costliest films ever made. For a 106 minute film, that means each second of the movie cost roughly $58,962.26, give or take a few pennies.

Forget all that, though, is the movie worth it? For fans of the first two films, I’d say the answer is a resounding yes.

Smith and Jones still play off each other as well as ever, with Jones’ stoic responses to Smith’s outbursts a terrific comic effect. Brolin is absolutely perfect as a younger K. Everything about him just screams K, from his appearance to his mimicry of Jones’ monotone, gravelly voice.

The pace is fast and frenetic, and the visual effects are excellent. Several people around me reacted audibly to some of the alien effects, which I think is what they were going for. Seeing a computer rendering of Shea Stadium during the Amazin’ Mets’ improbable World Series run was a nice nod to baseball history.

I won’t say too much about the realism of the movie for obvious reasons, but I winced a bit when Boris escaped from prison and spoke while on the surface of the moon. As the moon has no atmosphere, there would be no medium for the sound wave to travel through. He could have delivered the greatest speech in history and nobody would have heard it. Funny how I can like a movie so grounded in absurdity, yet nitpick the physics here. I did like the reference to the concept of a multiverse Griffin can see, though. For the uninitiated, the concept of a multiverse is that instead of just one vast universe, there are an infinite number of universes with an infinite number of different events (for instance, there could be a parallel universe where David Freese struck out last year in Game 6 of the World Series), and no two universes are identical. Anyone who watches The Big Bang Theory might recognize this as one of Sheldon’s beliefs.

Anyways. I’m losing the point. MiBIII isn’t a thinking film, and it’s not a serious film, although I will say that the end is surprisingly touching and emotional, if not a bit foreshadowed. It’s a fun movie that both men and women will enjoy. My group of friends was comprised of three guys and three ladies, and everyone liked it quite a bit. If you’re in the mood for something light and full of action and enjoyed the first and/or second film, definitely give it a chance.

Men in Black III gets a B.