It’s hard not to be excited about an extra day off of work, but it’s also important to remember why we are celebrating on Monday, May 28, 2012 this year. Memorial Day isn’t just about pools opening and people partying. Memorial Day is a day to honor those who have died in military service – putting their lives on the line to protect us and serve our country. 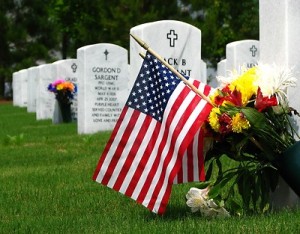 Memorial Day was originally recognized as “Decoration Day,” to honor the lives of soldiers who died in the Civil War. Then by the 1900s it was used to recognize all Americans who died serving our country during military service.

In his weekly video / radio address, President Obama reminds Americans to remember those members of our military who sacrificed their lives for our freedom during their 3 day weekend:

“This weekend, folks across the country are opening up the pool, firing up the grill, and taking a well-earned moment to relax. But Memorial Day is more than a three-day weekend. In town squares and national cemeteries, in public services and moments of quiet reflection, we will honor those who loved their country enough to sacrifice their own lives for it.

This Memorial Day, Michelle and I will join Gold Star families, veterans, and their families at Arlington National Cemetery. We’ll pay tribute to patriots of every generation who gave the last full measure of devotion, from Lexington and Concord to Iraq and Afghanistan.

Later that day, we’ll join Vietnam veterans and their families at the Vietnam Veterans Memorial — the Wall. We’ll begin to mark the 50th anniversary of the Vietnam War. It’s another chance to honor those we lost at places like Hue, Khe Sanh, Danang and Hamburger Hill. And we’ll be calling on you — the American people — to join us in thanking our Vietnam veterans in your communities.

Even as we honor those who made the ultimate sacrifice, we reaffirm our commitment to care for those who served alongside them — the veterans who came home. This includes our newest generation of veterans, from Iraq and Afghanistan.

We have to serve them and their families as well as they have served us: By making sure that they get the healthcare and benefits they need; by caring for our wounded warriors and supporting our military families; and by giving veterans the chance to go to college, find a good job, and enjoy the freedom that they risked everything to protect.

Our men and women in uniform took an oath to defend our country at all costs, and today, as members of the finest military the world has ever known, they uphold that oath with dignity and courage. As President, I have no higher honor than serving as their Commander-in-Chief. But with that honor comes a solemn responsibility — one that gets driven home every time I sign a condolence letter, or meet a family member whose life has been turned upside down.

No words can ever bring back a loved one who has been lost. No ceremony can do justice to their memory. No honor will ever fill their absence.

But on Memorial Day, we come together as Americans to let these families and veterans know that they are not alone. We give thanks for those who sacrificed everything so that we could be free. And we commit ourselves to upholding the ideals for which so many patriots have fought and died.

Thank you, God bless you, and have a wonderful weekend.” 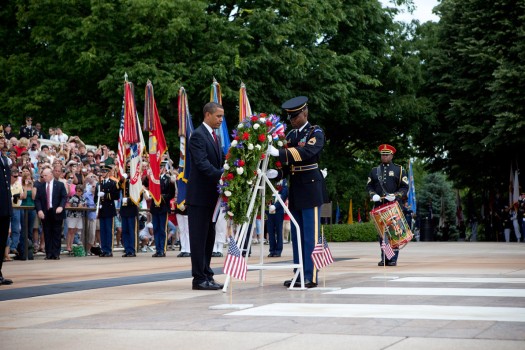 So while you are celebrating Memorial Day at the pool, with your friends at a barbecue, or wherever you may be this weekend – remember those brave men and women who put their lives on the line for us to enjoy all of the many freedoms that we have.