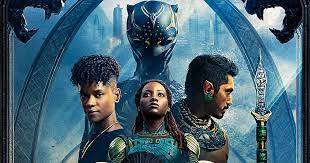 Boseman’s 2020 death from Cancer left Coogler’s story plans with a gaping hole. Without King T’Challa, most of Coogler’s story had to be scrapped. Because of this, the film feels a bit like a patchwork piece. But then again, much of the MCU’s Phase Four films feel kind of thrown together.

King T’Challa’s death is addressed immediately in the film. The sequence is beautifully put together and a brilliant homage to Boseman. In fact, his death is mentioned multiple times thoughout ‘Wakanda Forever.’

T’Challa’s sister Shuri, played by Letitia Wright and mother Ramonda, played by Angela Bassett struggle with his death throughout the film. These moments are sure to evoke emotion from the audience.

Much like ‘Black Adam,’ this film has been hyped beyond believe. While it looked like it would live up to the hype, the film ultimately falls short.

I was overly optimistic at first when Namor, played by Tenoch Huerta was introduced. Namor lives in an underwater country they call Talokan. Similar to Wakanda, Talokan is rich with vibranium, making the country a target for other countries wanting to be like Wakanda. Talokans defend their home with everything they have.

Talokans and Wakandans entertain as they battle it out. Unfortunately, the film goes on for way too long, clocking in at 2 hours and 41 minutes. The battle scenes seem to drag on at times, while at other times the film seems to have no action. It was as if Coogler couldn’t decide what type of film, he wanted to make outside of honoring Boseman.

My main gripe with the film was one of my same issues with ‘Black Adam,’ the CGI is at times just not very good.

Overall, there is much more good than bad in the film. ‘Wakanda’ works best when it gets personal. Without T’Challa, the women of Wakanda become the feature of the film. Nakia, played by Lupita Nyong’o and Okoye, played by Danai Gurira standout in the film. Having more prominent roles in the film since T’Challa isn’t around, the pair are more interesting than any battle.

When it comes time for someone to take over the mantle of Black Panther, it’s really no surprise. In fact, I came away not very excited for the future after the reveal.

The main thing I really enjoyed about the first film was the real-life racial issues that were intertwined into the film. That aspect isn’t really pushed this go-around. At the end of the first film, T’Challa says Wakanda would be a beacon for Black people. That is just lightly addressed in the sequel.

In fact, the biggest misstep of the sequel, which cannot be helped, is the fact that Boseman’s larger than life persona is sorely missed.

I felt like Bassett’s character or Nyong’o’s character should have been the main focus of the film. They are the two actors with the presence that is strong enough to carry a film like this, but in the end, much of the film focuses on Shuri.

While it’s not perfect, ‘Black Panther: Wakanda Forever’ is still one of the better MCU films to be released in a while. If you can get past the fact that the conflict is rather forgettable and go into the film wanting to see an emotional tribute to one not just one of the best young black actors who we lost too soon, but one of Hollywood’s brightest shining stars, you won’t be disappointed.

‘Black Panther: Wakanda Forever’ gets a B-.