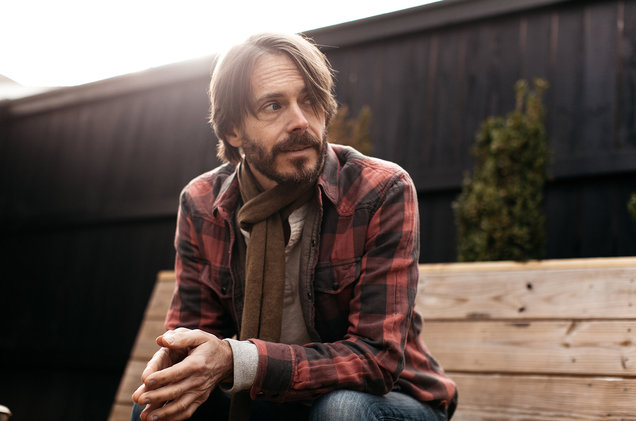 If you were a teen or college kid in the 90s, there is no doubt that you likely listened to a song by Toad the Wet Sprocket.

The band stood out from the likes of Nirvana, Pearl Jam and Soundgarden with their mellow, laid-back tunes such as ‘Walk on the Ocean,’ and ‘All I Want.’

Phillips took time to talk to ReviewSTL ahead of his sold-out show at Forest Hills Country Club in Chesterfield on Sunday. The show will benefit Open Door Animal Sanctuary.

If you are interested in trying to attend, there is a wait-list on www.breakroomconcerts.com. The show will begin at 8 p.m.

I’m sure you have been asked this many times over the years, but how did you come up with the band name, Toad the Wet Sprocket?

It was taken from a Monty Python sketch. They had a series of absolutely terrible band names and we thought it would be hilarious. It was supposed to be temporary and we were supposed to come up with something cool, but cool never happened.

Thinking about the 90s era of music, where would you rank that as far as best era’s of music go?

It was a great time to be in a band. I think every era of music is great for slightly different reasons. I think right now is a terrible time to try to make a living as a musician because of streaming and etc, ect. But, on the other hand, it’s an amazing time for the industry because of streaming. We have generations of kids growing up who have listened to all kinds of genres. I don’t know if there’s a best time. Probably most of the best music written has been lost because someone in a village just liked to sing.

Do you think that today’s youth are missing out on a part of music because they are streaming and not listening to records or CDs?

Well, yeah. I’m kind of unsentimental about the record. I kind of resent social media’s existence. Recorded music has been around for what, 100 to 120 years at most. So, could we argue that recorded music messed music up more than anything? People stopped playing for each other and with each other and I think that is a loss for humanity. Complaining about the album or CD, none of that compares to people sitting in a room and making music with each other. It’s one of the greatest losses of humanity that’s ever occurred in Western culture. The great thing about vinyl is that you have to be around to turn it over. It demands more attention. The speakers don’t move from room to room with you. These things create an environment where attention is mandatory. That’s the loss today, doing one thing at a time. It’s so hard to just do one thing these days. That could be why pop music is so robotic and repetitive. At the same time, there are millions of people seeking out inspirational and meaningful music. I think of my kids and the music they listen to and I were to gauge it by them, I would think there’s nothing wrong with them.

When the band was coming up in the 90s, what do you think made the band stand out from the Nirvanas and the Soundgardens?

I mean we were going through something different. We had to swim upstream. It was like if you weren’t shouting it you had nothing to say at times in the 90s. If you weren’t hard you were shallow. And once again, there were a ton of hard bands that weren’t shallow. I love Soundgarden and Pearl Jam. There was so much good music out then. And, a lot of it was gnarly. But, that wasn’t where we came from and how we felt. We were kind of outliers during that period. I was worried about old people problems at that time. We were nerds, we weren’t the cool kids. There were a group of people who felt a little bit outside and insecure in the world and we spoke their language and they found us. It’s nothing to demean any of the bands who were cooler or edgier, but the people who found us knew we were one of them. I feel good about that. We certainly weren’t doing the normal thing in the era.

You mention the term ‘nerd’. It seems like after the 90s, ‘nerd rock’ became cool. Were you ok being lumped into that category?

Yeah, one of the things that made me feel like we’d been seen was this Patton Oswald interview. He talked about how you got shit for liking comics and stuff like that. Marvel is now monstrously mainstream. Back then if you had a stack of Sandman comics you were a little weird. I liked Sandman so much we had Dave McKean do the art for the Coil record. Getting to hear Patton Oswald say it used to be hard to be a nerd, you’d get beat up and to mention Toad the Wet Sprocket. It made me happy to hear that he recognized us.

What was it like performing in front of a computer for fans during Covid? How different and outside of the norm was that for you?

I have been playing for about 8 years at that point on StageIt. I was actually used to online performance. The new thing was doing the live casts. I had never used Facebook Live or social media for that so that was a big change. I was able to do fundraisers for food banks and that sort of thing. When I realized it would last a while, I put a link on there were people could tip me. I wound up making it through the year on tips, so that was amazing. I’m incredibly grateful to the people who supported me and the causes during that time. We were able to raise about 20 grand for a person who had a brain tumor. There was a lot of really authentic community to grow out of that. I was happy to do it on a forum where I wasn’t putting a price tag on it. It gave me a lot of hope and made me really happy.

As a songwriter, is it always important to be honest in your music?

Honest is a complicated thing. Do you mean emotionally authentic? Do you mean narratively provable? I think that bar can get in the way of a song sometime. If you’re trying to write something that emotionally honest and you only have a three-minute pop song to do it, then you’re going to tweak a narrative or become a character. You can’t write a song to save the world in three minutes. What you can do is write something that a number of people can apply it to their own experiences. For me, that passes for honesty. It doesn’t have to have happened. We’re all acting a little on stage. There’s an edited version of yourself. There are details that not everybody needs to know about who you are or what you’re going through. You don’t need to say everything you think and you also don’t need to hold everything back.

Is there a song you look back on and wish you didn’t write it?

Yeah, if there’s a song that I could scrub from existence it would be ‘Hold Her Down.’ It’s been misunderstood and I think even when it’s not misunderstood, I was in a rage about how many women I knew who were sexually assaulted. It was written to be angry and confusing. I didn’t know enough about trauma at that time to realize that could trigger people and that wasn’t my place. I think it was a useful song and helpful song for some people who were healing, but I think it’s hurt people too. I really regret that. We grow and we learn. I understand where I was when it came out and it was always written with the intent to help and heal. I didn’t realize how sick the world would get. This was before social media and a degree of relentless misogyny and abuse. I certainly didn’t see it coming. In today’s environment, you got to be a little more careful than I was.

For me, I use writing as a form of therapy. Do you look at writing music as a therapeutic experience for yourself?

I describe it a lot as writing messages from my better future self to my current self. I listen to music to heal myself and open my heart. When I’m thinking about writing, I’m writing the song that I need to hear. That’s my job.

Once again, Glen Phillips will be playing at the Forest Hills Country Club on Sunday, November 13. The show will kick off with a cocktail hour from 7-8 p.m. Phillips will hit the stage at 8 p.m. For more information visit breakroomconcerts.com.