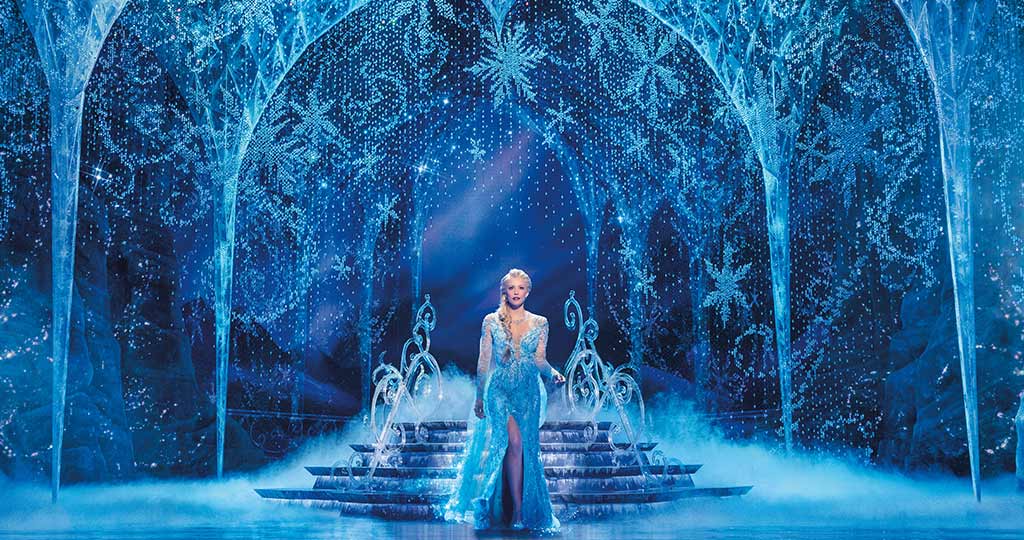 Bringing a movie to the stage always comes with a unique set of challenges – something Disney has been more than happy to take on over the past couple of decades. After finding early success with The Lion King, the House of Mouse quickly realized there was much more they could tap into. None of them have quite reached the heights of the spectacle that is the stage version of The Lion King, but all of them tend to be well rounded productions with great performers and toe-tapping musical numbers.

Frozen comes in with expectations beyond many of the other Disney productions. The pair of films have grossed just over $2.7 billion in box office receipts, spawned theme park attractions, more merchandise than could fill a NFL stadium, animated short films, and much much more. Little girls around the world (including my own) reenact Elsa’s show stopping number “Let It Go” on a daily basis. It stopped being just a movie shortly after the first film’s release and became something more like a phenomena.

With those high expectations you can see why the production of the stage play is so grand. If there is one thing you will take home from this show, it is the stunning use of sets, special effects, and overall production value. Disney has obviously spared no expense to ensure some of the magic from the films are translated seamlessly to the stage. The audience ooh’d and aah’d throughout many portions of the show, and it’s hard not to leave impressed at what you just witnessed.

The power of the franchise might be one of the shows flaws as well. This isn’t your normal Broadway style production. This is a show that is meant to be consumed by hordes of young girls dressed as their favorite Disney princess. The stage show clocks in at over 2 hours due to the addition of 12 new musical numbers that stall the story at times. There were moments in the new numbers where you could feel the crowd grow restless, and who could blame them? Many of the songs feel like they are there to pad the production’s runtime and song count. None of them match the catchy nature of the 8 original songs from the film.

That isn’t to say the cast doesn’t work the material well. The stars of the show Caroline Bowman (Elsa) and Lauren Nicole Chapmen (Anna) both pull their weight well, but are also given the meatiest numbers from the source material. Much of the added material is given to supporting characters like Hans (Will Savarese), who much like the film is overly earnest until his surprising heel turn. Olaf is given a nice turn with a bit of puppetry and humor from Jeremy Davis. Dominic Dorset does an admirable job as Kristoff and works well with the unique on-stage version of Sven.

The biggest highlight of the show is the Caroline Bowman’s bombastic version of “Let It Go” that ends the first act. The mix of her strong vocals, amazing special effects, and the now classic song end the first act with level that is never quite achieved again in the second act.

Surprisingly, the song I found to be the most Broadway like song of the film, “Fixer Upper” gets tweaked in a way that doesn’t feel very organic. This might likely be due to the change of the rock trolls being replaced by the “hidden folk” who are much more human in nature. This change brings a different quality to the song that adds a bit more chaos with little payoff.

The stage play does seem to build upon the relationship between the sisters with the added number “I Can’t Lose You”. The song gives both of the female leads a chance to really drive their vocal strength home, and give a strong show of chemistry since the duo are separated for much of the story.

It may be a bit unfair to compare the stage show to the film so much, but with the film so ingrained into our cultural mindset it is hard not to make the comparisons. After seeing the film the first time, I left the theater with the musical numbers stuck in my head. When my daughter was born and found her way to the movie the songs echoed through our household almost non-stop. I don’t think any of the added songs have that kind of staying power, and they don’t seem to add to the story enough to justify their presence.

The spectacle is still well worth the price of admission, but be aware that some younger fans might find some of the parts sluggish and hard to get through. The high moments pay off well, and hopefully should help power even the smallest of Frozen fans through to the end.