When I write up a movie review, I usually have a pretty standard process. I jot down some notes, and when I get home, I lay out an outline, add some thoughts, and stretch it out into a review. Pretty standard stuff. But when I got home from seeing Assassination Nation, I couldn’t do it. 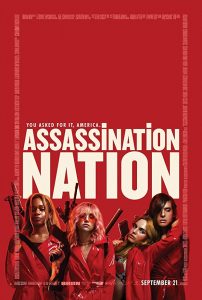 Sorry, I’m sure you don’t care about my writing process, so I’ll wrap it up. But Assassination Nation wasn’t really a film that I knew anything about going in, and as a result, I left the theater not really knowing how I felt about it, so I had to let it stew in my head for a night. In hindsight, this would have been a fantastic movie to see with a woman, so I could have gotten some additional perspective from a different standpoint.

The premise of the film’s not overly complicated. A group of four high school girls spends their time hanging out, watching movies, talking about guys in a small town, Salem.  By all accounts, it’s a pretty average life until people start falling victim to a massive data hack. First, the mayor, whose secret lifestyle and internet search history shame him into committing suicide in front of recording cameras, a la Budd Dwyer. The principal of their high school follows, and eventually, much of the student body is victimized. Eventually, the blame for the leaks incorrectly falls on the shoulders of Lily Colson (Odessa Young), and when a vigilante crowd, comprised of people whose lives were deleteriously affected by the leaks, illicit texts, and pictures, seeks justice, she, Sarah (Suki Waterhouse), Bex (Hari Nef), and Em (Abra) band together to protect themselves against the mob.

It’s a simple story, but underneath the surface, there are a few layers that thankfully don’t require much digging to find. What writer/director Sam Levinson gives us is a warning, or several warnings, if we want to be more specific. It starts off with a trigger warning and then comically provides a rather large list of caveats that might cause emotional responses in viewers, ranging from sexting to gratuitous violence to homophobia. To its credit, it manages to hit most of them on the head. When the mayor’s phone and e-mails get hacked, everyone in town gets to see he’s privately been a cross-dresser; when they see his search history, they can see what type of lascivious websites he’s been perusing. When one girl is discovered to have sent explicit pictures to a married man, her boyfriend humiliates her, calling her out publicly and blaming her for getting embarrassed.

There are a lot of other scenes that will (or at least should) make your blood boil. I won’t get into too many specifics as to ruin the plot, but it was pretty outrageous, and I walked out of the theater trying to reconcile my feelings as a guy with my feelings as a reviewer, telling myself that I’m not the target audience, that women are. I think I was wrong, though; we are equally the target audience. This isn’t a movie that’ll make you feel good; you’re probably going to squirm through a good portion of it, and that’s the point. There’s nothing covert about the message it’s trying to relay. Essentially all of the men in the movie are caricatures of extremely dangerous behavior: pretty much every guy is guilty of catcalling, trying to use a woman’s weakness to take advantage of her, blaming the victim, slut shaming, etc. This is a movie that’s swinging haymakers, and as a result, it’s going to hit hard, but it’s also going to be hit hard, left vulnerable to criticisms about the absurdity of it all.

Stylistically, it’s not going to please everyone. It’s geared at younger adult audiences, and at times, the cuts and scene splicing can make it tough to follow occasionally. The actors themselves, though, do a great job bringing the story to life. The four main characters play their parts well, and we feel as though they’ve actually been friends for years. One of my main nitpicks of films about young adults is that the dialogue often just feels fake, as though it was written by someone envisioning what they think young people sound like. In Assassination, though, their conversations are a bit more organic and seem more realistic.

I get the feeling there won’t be a general consensus on Assassination Nation. It’s likely going to be pretty polemical, and understandably so. My buddy Ben really didn’t care for it at all, but then again, he’s a Red Wings fan, so maybe his tastes aren’t to be trusted anyway. The film was meant to be pretty pro-feminist, but I think just as often, it was also simply anti-masculine. It’s a film that’s meant to incite dialogue, and I think it’ll succeed on that front, at least. If anything, it’ll bring light to some looming issues that most people aren’t comfortable talking about, and for that, I respect it.

Assassination Nation gets a B-