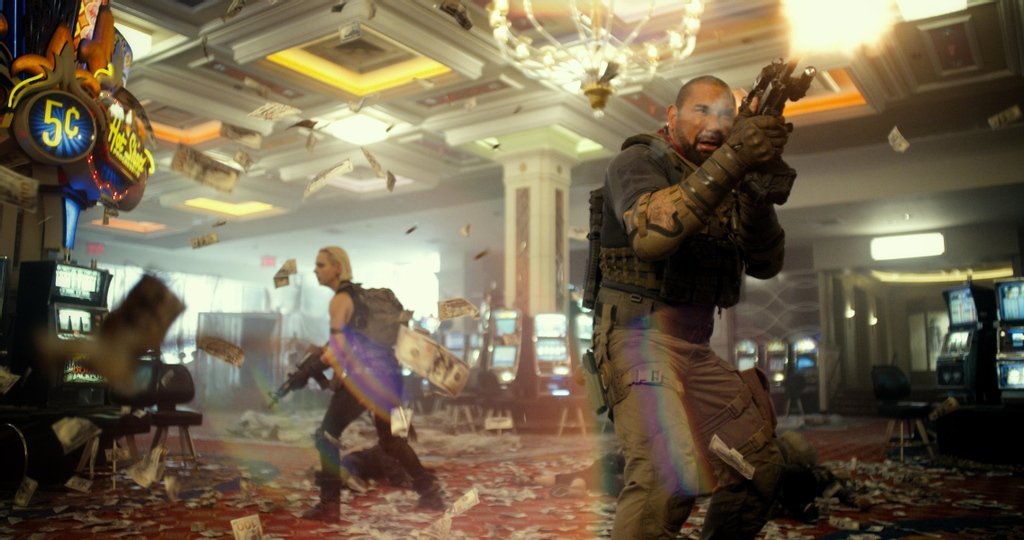 This AIN’T your Grandma’s zombie movie!

Probably one of the most anticipated films of this Spring is Zach Snyder’s Army of the Dead. While the film releases to stream on Netflix on May 21st, it is receiving a limited theatrical run beginning May 14th.

Snyder, fresh off the success of his cut of Justice League, which recently released on HBO Max and seemed to breathe a bit of life back into the DCEU (as well as give fans a speckle of hope and gratitude that DC will continue to move in the right direction), has no intention of giving up the reigns as groundbreaking filmmaker anytime soon. Army of the Dead is led with a colorful cast consisting of Dave Bautista, Ella Purnell, Ana de la Reguera, Omari Hardwick, Nora Arnezeder, Garret Dillahunt, and Tig Notaro (and so many more).

Snyder burns down the traditional living dead genre and create something completely different. Following a zombie outbreak that destroyed Las Vegas, the world is trying to rebuild itself after the city was blocked off and quarantined with its dead inhabitants still roaming about. With many survivors being detained, the decision on how to handle the situation, with a nuclear explosion of course, is set into motion. A group of mercenaries, led by Bautista’s Scott Ward, is propositioned with the objective of breaking into the quarantined zone to pull of a heist like no other. Ward, his daughter, a rag tag group with some much-needed skills, and some inevitable disposable randoms venture into the zombie-overrun Las Vegas.

With Snyder behind the camera, it’s to no surprise that what Bautista and company come face to face with on the opposite side of the barrier is nothing shy of original. If you thought the runners in 28 Days Later were scary, wait until you see these things. They are organized, intelligent, fast (frighteningly athletic), and this is their territory now. Oh, and in case you didn’t see the trailer that blew up the internet, did I mention there is a zombie tiger? All of that and more are packed into over 2 hours of runtime and what proves to be a bloody good old time.

The film released the first fifteen minutes of footage online for viewers and those first fifteen minutes really demonstrate how the remainder of the film will play out. The script is fun, original, violent, and has all the zombie/civilian casualties you could ask for. It’s pure grisly fun from the first few frames. While some elements of this zombie civilization seems to be a little…..absurd, it by no means diminishes how fun and action-packed Army of the Dead truly is. If you have expectations, check them at the door. Because, I can guarantee you that you have no idea what Snyder has cooked up for audiences. I also must say, it is quite refreshing to see Snyder returning to this genre as his adaption of 2014’s Dawn of the Dead pleased audiences and still holds up as a fantastic entry into zombie horror.

Buckle in, grab some popcorn, maybe make sure you don’t have a weak stomach, and enjoy what is hopefully the first entry in a series of films that completely redefines the zombie genre for a new era. Is it fun? Absolutely. A little nonsensical? Of course. Does this make it any less enjoyable? Only if you’re a cynic that doesn’t know how to laugh or maybe this genre isn’t your thing (in that case, might I recommend a rom-com instead). If you have the chance, I definitely recommend catching Army of the Dead in the cinema where it is currently having a limited run, but if you can’t, or maybe prefer the movie-viewing pleasure and safety of your own home, then keep an eye out on Netflix for this release next week. It won’t disappoint.