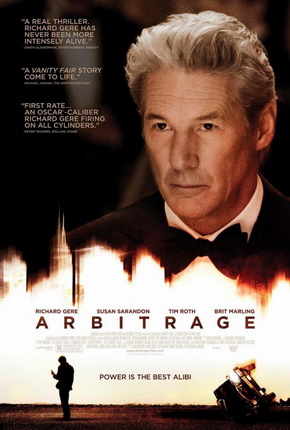 Now, I generally root for the “good guy,” but sometimes there are just instances where you can’t help but enjoy the bad guy more. Perhaps they’re not necessarily bad, per se, or they’re just so much more interesting than any of the good guys. Many of my good friends find Darth Vader the best character in the Star Wars universe. Obviously I’d never cheer for the Nazis, but you won’t find too many people who will validly claim any character other than Hans Landa was the star of Inglorious Basterds. In both of these cases, though, you had the option to follow someone else: Luke and the Rebellion in the former, the Basterds in the latter.

In the case of Arbitrage, you’re pretty much stuck with the bad guy; either you hope he wins or you hope he gets caught. The result is a film that blurs the line between good and bad but is still a thoroughly enjoyable experience.

Robert Miller is a hedge fund magnate; his personal value is estimated to be in the billions. His colleagues call him the Oracle for his incredible ability to land unusually high rates of return for his investors. Turning 60, Miller is preparing to sell his empire, nominally to spend more time with his wife Ellen (Susan Sarandon), children, and grandchildren. What a guy!

The truth, as it always turns out, is more sinister. While Miller claims to be working at night, he’s actually whisking away to an apartment where he’s carrying on an affair with a young artist named Julie (Laetitia Casta). Juggling his affair with the struggles of selling his company, he suggests they spend some time upstate away from it all. Driving late at night, Miller rolls Julie’s Mercedes off the median, snapping Julie’s neck, killing her instantly. Needing help, he walks to a pay phone (what’s a pay phone?) and calls Jimmy Grant (Nate Parker), whose father worked for Miller as his driver.

When the police arrive on the scene (because they tend to do that when the charred remains of a model-esque lady are found in the middle of the road), Detective Bryer (Tim Roth) soon picks up Miller’s trail and begins stalking his prey. It’s not long before his world is affronted from two different angles: the police and his family. As it turns out, Miller struck a bad business deal and is $412 million in the hole. In order to facilitate the sale of his company, he has to borrow money in order for his accounts to pass the audits. The problem is, his daughter (the lovely Brit Marling) works for Miller and discovers the ruse; in addition, the person who loaned him the money wants it back by the end of the week, putting added pressure on Miller.

It’s a little unsettling when you first realize that you’re following the path of the bad guy and becoming emotionally connected to him. You might be thinking, “oh, well he’s not a bad guy, his family loves him, etc.” but let’s make one thing clear: if this happened in real life, most people would condemn him. A super-rich guy who loses a crapload of money and works to cover his butt while running from the police after killing the woman he’s having an affair with.

Yet, somehow, you find yourself pulling for Gere/Miller to pull it off. He’s a tremendously charismatic guy who really does care about his family and their well-being. The relationship between Miller and Grant is revealed to be a rather paternal one; when Grant’s father became ill and died, Miller paid for his medical bills and promised him he’d take care of his son.

The supporting cast is strong, too. Sarandon is terrific as a doting wife who’s also no fool; she’s fully aware of Miller’s licentious tryst and plans accordingly. Marling gives an excellent performance as well. She starts off as a fully confident, intelligent young lady, but by the end of the film, her whole world is falling apart, her image of a perfect father in shards. The only casting decision I didn’t really like was Tim Roth. I was a big fan of Lie to Me, but playing a detective with a Bronx accent really isn’t his forte. His attempts to cover up his British accent are painfully obvious at times, and he doesn’t really seem completely comfortable here.

For me, the best performance was by Parker. His character is perhaps the most genuine person in the film. Haunted by a troubled past (he was arrested when he was much younger for possession, but Miller’s uber-expensive lawyers got him off the hook), he’s a guy who’s looking to make the most of his second chance, saving up to move to Virginia and buy an Applebee’s franchise (leading to the best one-liner in the movie) with his girlfriend, Reina (Monica Raymund, reunited with her Lie to Me co-star Roth). When the police begin investigating, they zero in on him and threaten to bring a case against him for obstruction, but he refuses to testify against Miller, demonstrating a loyalty that’s rare these days.

Sidenote, a lot of sites I found discussing the release of the film mention the plot being a Bernie Madoff-esque Ponzi scheme, but that’s not entirely accurate. In a Ponzi scheme, the perpetrator gets investors to invest their money in a (usually fake) scheme or company by promising incredible returns; they then cook the books and pay off the initial investors when they receive even more money from other investors, who they then pay off from new investors, and so forth. In Arbitrage, it’s a different mechanism. Miller receives word of an opportunity to invest in a copper mine in Russia and invests $100 million. The mine is legit, but he then has to hedge his investment by buying the copper and hoping he can sell it on the market, thus bringing the total of his investment to $412 million. Unfortunately, the Russian government refuses the release of the copper and won’t let him sell it, leaving him with the bill. Desperate to sell the business, he borrows the $412 million (with interest) from a business friend and places the money into his company’s account so it’ll pass audits. Borrowing the money in and of itself wouldn’t be against the law, had it been reported properly as a loan. Miller, though, is trying to protect his company and pass it off as his own money, because reporting it as a loan would have increased his companies liabilities as well as assets.

(Special thanks to Mike Piper of Oblivious Investor for much of the financial information in the above paragraph. If you ever need financial advice, check out his blog or any of the seven books he’s written. Mike’s an old DeSmet classmate of mine and one of the smartest people I have the fortune of being friends with. And no, he didn’t pay me to say any of that.)

But I digress. Don’t let that whole plethora of business stuff deter you from seeing this film. It’s a smart, crisply-made film, one that offers a different perspective on the 1%-ers. And don’t feel too bad if you end up rooting for Robert Miller; I certainly didn’t.

Arbitrage gets a B+.