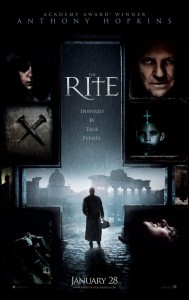 Colin O’Donoghue stars as Michael Kovak, a seminary student having a crisis of faith in the new horror film The Rite. In order to help him overcome his doubt the seminary does what they normally do in situations like this – they ship him off to the Vatican and teach him to be an exorcist.  Once in Rome he’s teamed up with Fr. Lucas Trevant (Anthony Hopkins), an unconventional priest tasked with teaching him the ways of exorcising.  Business must be slow because, with the exception of a brief interlude, there seems to be only one possessed person in Rome, a pregnant teenager by the name of Rosaria (Marta Gastini).  Kovak approaches matters with a healthy dose of skepticism, constantly looking for earthly explanations such as drug abuse or mental illness.  Trevant however is a more perplexing figure; part Dr. House, part Mr. Miyagi and (possibly) part charlatan.

Director Mikael Håfström (1408) brings a nice touch of ambience to the proceedings, showing us a Rome that’s decidedly un-touristy.  And the film has a surprisingly healthy respect for religion.  True, the main character doubts his faith but his existential dilemma is a personal one.  It’s not motivated by “straw men” like a corrupt Church or an immoral priest.  Granted, the film’s motives aren’t entirely altruistic.  If we (for the purposes of the story) question the legitimacy of the Catholic Church then there’s no way we can believe in their exorcisms.  But the film has a sincerity about things that’s refreshing.  It accepts faith as a real thing, even if it can be dismissed as merely a means to an end by non-believers.

Ironically, the same “sincerity” that differentiates The Rite from similar films is also its biggest stumbling block.  The movie’s attempt at realism causes it to be remarkably subdued when it comes to its depictions of the possessed.  Heads do not spin; pea soup is not spat; people do not levitate; crucifixes are not…well, perhaps we shouldn’t rehash crucifixes were used for.  Suffice it to say, this isn’t your father’s Exorcist.  And while the filmmaker’s restraint is a bold choice it makes for some rather anti-climactic cinema.

O’Donoghue, a relative newcomer, is quite likable as a priest-in-training.  And Hopkins adds a spark to his dialog that most assuredly wasn’t on the written page.  Unfortunately the film straddles two worlds unsuccessfully, never quite being smart enough to be a psychological thriller nor scary enough to be a true horror film.