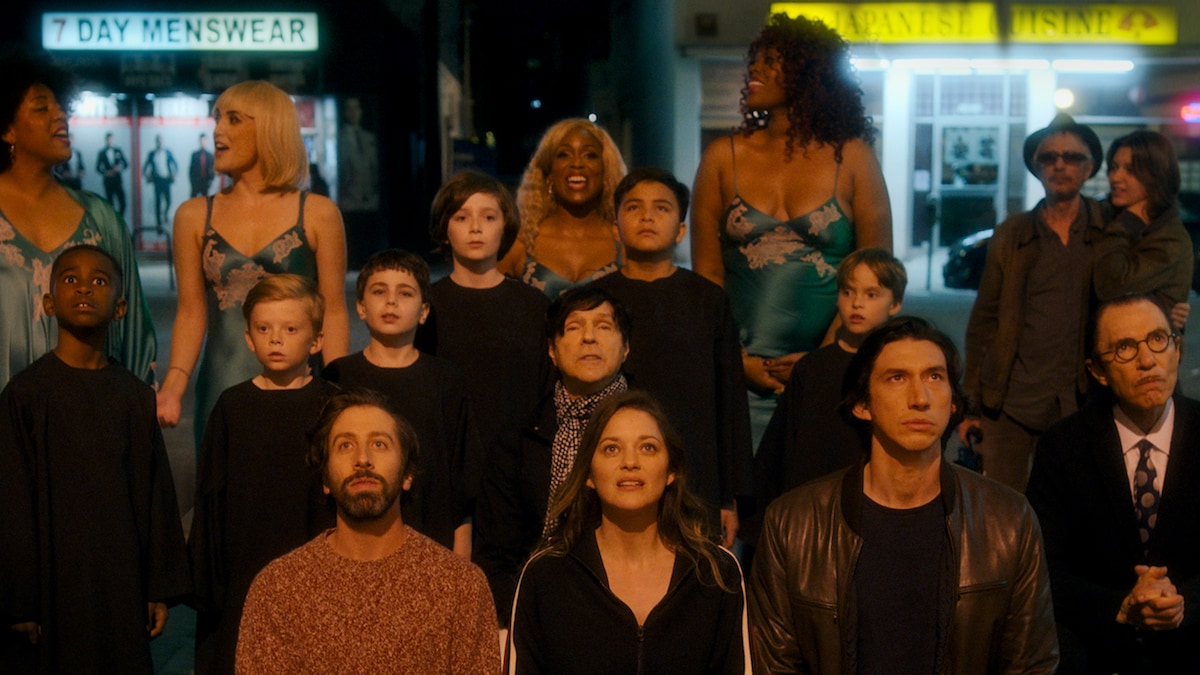 I can’t stop thinking about Annette.

The film, directed by Leos Carax (Holy Motors), opened the Cannes Film Festival last month and took home awards for Best Director and Best Soundtrack. Ron and Russell Mael, the brothers behind the band Sparks, are responsible for not only the music in the film – but also the imaginative screenplay.

This film will not be for everyone. Let’s put that out there from the jump.

Annette is a bizarre, unconventional, and mesmerizing rock opera that tests the audience’s patience at every turn. But in exchange, you are rewarded with a thought-provoking experience, full of incredible performances and fantastic music.

The story follows a celebrity couple, comedian Henry (Adam Driver) and opera singer Ann (Marion Cotillard), who are both rising stars. After the birth of their daughter Annette, Henry struggles with his act – “The Ape of God” – and starts to spiral into a downfall of alcohol-fueled depression. Meanwhile, Ann is beloved by all and her career is taking off. Henry must find a way to deal with their new dynamic, and salvage what is left of his career and their family.

There is a strange quality to the musical numbers in Annette, which are not as polished as the ones we are used to. They feel more grounded, and raw – like how out of place it would be for characters to start singing without a stage in real life. It is that sort of disconnect which can feel uncomfortable, yet hypnotizing at the same time. It challenges everything you think you know about these storytelling conventions.

Driver commands the film through his size and undeniable acting talents. He is mesmerizing in this role, deeply committed to the lunacy at hand. I can’t imagine any other actor pulling this off with such bravado and making it work the way he does. I would love to see him in more musicals.

I wish Cotillard was given more to do in the film, as she is a phenomenal actor. Here she is great as always, but this is no doubt Driver’s film. With that being said, her singing is sublime and she shows a believable vulnerability while dealing with her relationship and her husband’s destructive behavior. You feel she truly loves her child, as does Driver’s character, and the fact that they make that feel so real is what makes it all work.

The real surprise is how fantastic Simon Helberg is in the film. Known best for his tenure on the successful sitcom The Big Bang Theory, the actor shows up with something to prove – that he has much more range than the character that put him on the map. And here he does just that, shedding any image he may have had as Howard Wolowitz, and turning in a brilliant turn as the conductor/pianist who accompanies Cotillard’s character. There is a scene where he conducts an orchestra while the camera circles him continuously while he speaks to the audience, which is sure to go down as one of my favorite sequences of the year. I’m excited to see what he does next.

The music of the film is fantastic right from the start. Sparks sets the tone in the way only they can, opening the film with the earwig “So May We Start” that is still playing in my head days after seeing the film. It’s a self-referential number that pairs perfectly with the tone of the film, where we also see the director walking alongside the musicians and actors. Anyone who has seen Edgar Wright’s brilliant documentary The Sparks Brothers from earlier this year will have a deeper appreciation for the brothers, and most certainly this film. It was a project that started as a concept album and morphed into a film. After some of their false starts in the past, I couldn’t be happier that they had the chance to make this into a reality.

I’m not going to go more into details about just how or why the film is so strange, and unique. The best way to experience this story is to see it. Just trust me when I say it is unlike most anything you have seen before. Go in knowing nothing, and let the performances and dreamlike incongruity speak for themselves.

Does everything in this film work? No. There is nothing conventional about this film, and when you get this much artistic experimentation there are bound to be things that miss. But what we get is something so wildly different than we are used to seeing, and probably even then you would expect here. Those familiar with Carax’s work will expect the unexpected, but many are going to wonder what they are even watching. And that’s alright!

One thing is for sure: no matter where you land on the film, it is one you are sure not to forget anytime soon.