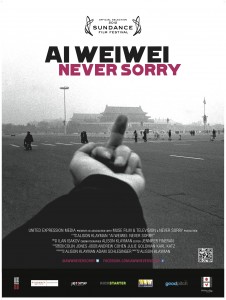 Often lives of artists are disregarded by the general public.  Those who possess art degrees are told their degrees are worthless, and others are belittled because part of our society believes art equals play. Anyone with this line of thinking should be shown Ai Weiwei: Never Sorry. This documentary follows the famous Chinese artist Ai Weiwei, who many might know as one of the designers behind the 2008 Bejing Olympic’s National Stadium, also known as “The Bird’s Nest”.  The film primarily focuses on Ai’s struggles as a brilliant artistic mind living in a country where his brand of liberalism is not looked upon fondly by the government.

Ai Weiwei, upon first glance, appears to share some qualities with 2010’s Exit Through the Gift Shop‘s Thierry Guetta. He has a large team who works underneath him (one of his worker’s describe’s himself as one of Weiwei’s “assassins”), and produces art for his gigantic exhibits. It becomes apparent that Weiwei has a lot to separate himself from the satirical Guetta, due to the substance of his art, and his capability to actually produce the art on his own. Weiwei’s exhibits range from photo galleries to a large exhibit that features 100 million hand painted porcelain sunflower seeds.  His art is unique, stunning, and popular with intellectuals and artists. However, gallery art isn’t where Weiwei exerts his influence on the world. Ai Weiwei’s greatest canvas is his country and his unique approach on how to change it.

The film follows Weiwei as he struggles to fight against a country that is slightly becoming more progressive, but still contains much of an oppressive regime. Friends are put into prison for inciting unrest against the State, Weiwei himself is put under constant surveillance, and violence is perpetrated against him in one instance. His art is not simple, it is not easy, and it most certainly isn’t something everyone has the capability for. The consequences of his actions seem plain to Weiwei, but he greets such consequences as just another sacrifice for his art, and for a step in the right direction for his country.

Ai Weiwei: Never Sorry works on many levels. It’s an interesting character piece. It’s easily approachable, one doesn’t need to know the finer parts of art critique. What makes it a solid documentary is the feelings it stirs up. It shows that one person can make a difference.  That person may not be perfect, and the outcome might not always be favorable, but change can start from one mind. Weiwei’s decade of residency in New York City seem to have given him a different perspective on his home country after seeing a Western democracy in action. Not content to slide back into the system, he instead works towards making broad ideas celebrated in his homeland.

For the past decade there has been much talk of patriots, and it’s easy to forget what type of platform we have here in America. Could you do the same thing if put in Ai Weiwei’s shoes?

Protest and art become one in Ai Weiwei: Never Sorry. It’s important to note that the film might become more poignant throughout the years as Weiwei continues his dissidence of his government. This film is recommended viewing for anyone with a modicum of interest in the art or political worlds.