I’ll get it out of the way right here: Act of Valor is a recruitment film.

A damn good one, at that. 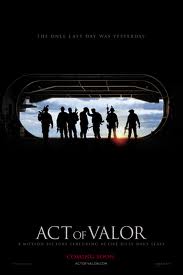 Interestingly, the film actually did start out as a recruiting film for the special operations community, as directors Mike McCoy and Scott Waugh point out at the beginning of the film. Eventually, it was fleshed out into a full feature film, and the decision was made to allow active duty US Navy SEALs (an acronym for SEa, Air, Land, representing the theaters in which they operate) to portray the main characters.

As a result, there aren’t any credits for the SEALs, so it’s hard for me to elaborate in too much detail about the whole plot. I do remember Lieutenant Rorke (who sounds a LOT like Peyton Manning, and even bears a slight physical resemblance to him) being the name of the team leader, but that’s about it. I get the feeling, though, once the action starts, most people in the audience won’t be concerned with such a pithy matter.

The film begins with the murder of a CIA agent and the kidnapping of another agent (Roselyn Sanchez). Once the kidnapping is made known, the US sends in a boat crew of SEALs (it’s my understanding that the SEAL teams are split into platoons, which are then further divided into boat crews of six or seven) to rescue her. After this is successfully accomplished, evidence recovered during the rescue points to a much larger plan which could threaten the lives of thousands of American citizens. Lieutenant Rorke leads his team to discover the nature of the plot and prevent it.

By and large, the acting is just so-so. These guys are SEALs; they’re not Hollywood-trained. As a result, most of the non-combat dialogue seems a bit…forced, I guess. None of these guys will be getting any nominations for Best Actor, I’d wager.

Not that any of that matters. Once the bullets start flying (and I mean that literally; in several of the scenes, apparently live rounds were used), the nitpicking about plot and dialogue will go out the window. The action is harrowing and intense, and some of the scenes were shot in first-person. The film claims to accurately portray SEAL tactics, although the Department of Defense had control over the final cut; allegedly, some of the scenes that were cut portraying planning and execution of missions are being used in training for current SEAL teams.

In spite of the mediocre acting, I found myself truly caring about the well-being of these men. I’m sure a lot of it had to do with the fact that they were actually enlisted, but the scenes involving their families were somewhat touching as well. I won’t go into a diatribe on war and the justifications of war; regardless, my appreciation of the men and women who volunteer to serve this country will never be deterred. These guys are among the best in the world at their profession, and it’s easy for some to forget the emotional impact that their lifestyles have on others, particularly their families. There is one scene in particular that moved me. I’ll describe it at the end of this article, as it may contain a spoiler not everyone will want to read.

The film is what it is: an action film. It just so happens to star some of the best-qualified main characters. Some have claimed it’s simply a propaganda film, calling it a modern-day Top Gun. I can see the comparison, but I don’t agree with it. Top Gun was a Hollywood glorification of the life of naval aviators. Act of Valor does portray the life of a SEAL as a pretty kick-ass profession, but it also tries to reveal the risks and less glorious side of the lifestyle.

I came out of the film with an even greater appreciation of the sacrifice enlisted men and women have made. At its core, it is still an action movie, but it’s one that I found myself getting involved in. I would recommend this film for anyone who knows someone who is serving or has served in the armed forces. Though its presentation is glossed up, it’s a reminder of the things we don’t always appreciate. It’s not going the re-invent the wheel, but it makes for an entertaining ride.

Act of Valor gets a B.

The film does portray the funeral of one SEAL who is killed during one of the missions. After the ceremony, the active SEALs who attend the funeral remove the SEAL insignias from their uniforms and use their hands to hammer them into the casket of their fallen comrade in a sign of solidarity; by the end, the casket has a full line of the insignias (colloquially referred to as Budweisers). Obviously I’ve never been present for the funeral of a SEAL, but I had seen a clip of one online, and to see it done in the film with an appreciation of the gesture was pretty moving.