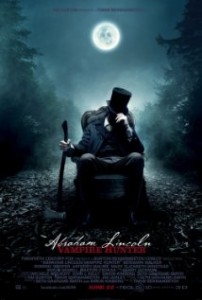 About a month ago, I was sitting in the theater and two things happened that I was very upset by.  A teaser trailer for “The Twilight Saga: Breaking Dawn Part 2” came on and a couple of people applauded when it ended.  Then a trailer for “Abraham Lincoln: Vampire Hunter” immediately followed.  The audience seemed captured by the action and imagery that the trailer possessed.  Then the title of the film appeared, and over half of the audience started busting out laughing.  My heart sank a little bit knowing that some audiences would applaud a “Twilight” film while at the same time immediately dismiss “Vampire Hunter” just due to its name.

I think I was in the same boat as the majority on this film: it was going to suck and be ridiculous.  But my reasons seem to be very different from everyone else I talked to about the film.  After seeing “Dark Shadows”, I had no faith in Seth Grahame-Smith as a screenwriter.  Director Timur Bekmambetov was only adding to my suspicion that the film would be all style and no substance.  While “Abraham Lincoln: Vampire Hunter” is far from the best film of the summer, if you can accept it for what it is, then you will have a lot of fun with  it.

Just in case you can’t comprehend what the title means, the story tells us about Abraham Lincoln from the time he is a young boy through the time of his presidency and the Civil War.  What the history books have neglected to tell us is that while Lincoln was studying law, he was also hunting vampires out of vengeance to track down the one vampire who killed his mother.  Vampires continue to be a nuisance for him through his time in the Oval Office.

Yes, it is ridiculous.  Now can we get over that fact and try to accept this as a film and entertainment?  This is the main question that audiences will have to answer in order to enjoy this.  The film has a lot to offer.  The acting all around is very good.  None of the actors think they are making a crappy B-movie and that they only have to turn in half a performance.  They give it their all, and it really pays off.  The first two thirds of the film especially are paced extremely well with some great action pieces scattered throughout.

My only complaint is in the last third of the film.  Lincoln is now President, and the film kind of quickly jumps through this portion of his life to get to the climax of the film.  It just does not feel nearly as fluid as the rest of the film.

Audiences really need to give this a chance.  Plenty of people will enjoy this outside of the typical genre fans.  It may be a film that picks up a lot of steam once it hits Blu-Ray and DVD.  I would recommend seeing it now on the big screen.  It has a great visual style that is well worth it.