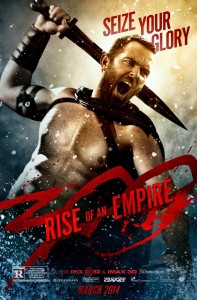 Ah, 300, a movie we all remember fondly. A movie full of guys we wanted to be and the girls wanted to be in. A highly stylized action movie that, even today, is still fun to watch and is insanely quotable. It was a fun story, one that sparked many to get in shape and be like King Leonidas and his men of three hundred. Fast forward almost 7 years and we all get the sequel. Wait, what?

There are tons of great stories in Greek history. The Battle of Thermopylae—the battle that 300 is based off—is one of them. The reason this story was told and the reason Frank Miller decided to write it is because it’s a story based on unfathomable odds, made special by some amazing action and stylistic choices by director Zack Snyder—who did not direct this sequel, he just helped write it—and the aforementioned Miller. Let’s not forget charismatic actors like Gerard Butler and Michael Fassbender who graced us with their baddassery. And top it off with the insane art direction, slow-motion scenes and accompanying heavy metal kick-your-face-in music. When most of us left the theater, we had enough testosterone overflowing that we could save a school bus full of kids from a pack of killer bears with chainsaws for arms.

300: Rise of an Empire has none of that, but I’ll get to that soon. The sequel is kind of hard to follow. Since, you know, it’s ancient Greece, it’s kind of hard to gauge where we’re at in the timeline during the beginning of the film. It’s not like we get 1970’s Volvos driving around to help us realize we’re watching something in the past. Due to the sporadic narration I became confused, and for the first few minutes of the film, I was unsure if we were in the past, present or future. For the record, the film takes place before, during and after the events of the 2007’s 300. Rise of an Empire takes viewers to The Battle of Artemisium, which was a huge navel engagement taking place at the same time King Leonidas was lopping legs off and kicking elephants off the cliffs of the Hot Gates.

We follow Themistocles, played by Sullivan Stapleton, which I’m sad to say, I just never cared about. His on-screen presence and charisma is nowhere near that of Gerard Butler. And this is the first of many problems in the film. We’re supposed to care about this character, he was the sole reason for the Persians coming back and trying to take Greece a second time, which then resulted in the deaths of millions, including our Spartans of the first film. Geez, way to go, Themistocles. Anyway, Themistocles’ main baddie is the female naval general, Artemisia, who is played by the only redeeming quality in this film, Eva Green. Green’s portrayal of the Persian-Greek baddie is great. Her on screen presence shines both through her ruthlessness and quench for violence. Not to mention her sexiness. She’d be right at home in another film that shares a similar name. Sadly, she was the only character I really cared about by the end of the film. Which wasn’t the direction I think the director intended me to take. She was just had much more “pop” on screen than any of the other characters.

This theme really carries over for the rest of the film. But it’s alright, because every character you come across is instantly forgettable. Besides the protagonist and antagonist, I can’t remember one man—and there were many—who fought beside Themistocles. And on the reverse side, there were no cool enemies like in the first film—no sweet executioner, no weird goat head-guy and the Immortals are giant sissies this time around. There were also no awesome quotes (just cheesy ones), no iconic moments and no gratuitous sex scenes. Oh wait, yes there is. Fans of the original film will recall the infamous sex scene between a King and Queen. There’s one in this one, too. Now, I don’t want to spoil anything, but let’s just say it’s completely out of character for the parties involved and is very… forceful.

300: Rise of an Empire is a film we all never really asked for, but the powers that be thought it was a necessity, 7 years after the original. The film has the same slow-motion action scenes that characterized the first, but that’s about where the similarities end. The writing and narration is convoluted and tedious, the characters forgettable. There were a few redeeming qualities—some of the action scenes were pretty awesome, Eva Green rocked as a villain, and every time you do get to see the Spartans on screen, it’s the best 10 minutes of the movie. I think the marketers should have just called this movie, Greece: Rise of an Empire, because the Spartans are barely in it. Leena Headly, who played Queen Gorgo (Leonidas’ wife), gets about 5 minutes of total screen time.

It’s a film we never asked for, but one we got. If you need an action romp/popcorn flick, it’s not a bad choice. Just don’t expect it to “wow” you and get you pupped in the same way 300 did.