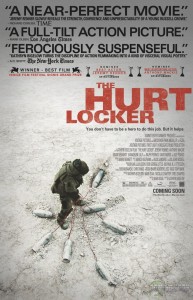 I just reported that a Hurt Locker producer, Nicolas Chartier, has been denied access to the Oscars after a bad judgment call. (Read the article here.) Now, the makers of the film are being sued by an U.S. Army bomb disposal expert.

Master Sergeant Jeffrey Sarver has filed a multi-million dollar lawsuit against the makers of the film, claiming that the main character on the film is based upon him.

“The Hurt Locker motion picture and DVD are nothing more than an exploitation of a real life honorable, courageous, long serving member of our armed forces, by greedy multi-billion dollar ‘entertainment’ corporations,” his statement said.

Sarver’s lawyer today in a news conference cited producer/screenwriter Mark Boal’s 2005 Playboy interview as the inspiration for The Hurt Locker. (Read the piece here.) Saver also claims that he game Boal the phrase, “The Hurt Locker”.

Summit released a statement to address the allegations, as they along with director Kathryn Bigelow are among the defendants. “We have no doubt that Master Sgt. Sarver served his country with honor and commitment risking his life for a greater good, but we distributed the film based on a fictional screenplay written by Mark Boal. We hope for a quick resolution to the claims made by Master Sgt. Sarver.”

I have no doubt that the interview with Sarver contributed much to The Hurt Locker, mainly by grounding the film in a bit more reality than it would have been normally. However, it would be stupid to do an article on the man, and then make a film directly based on him and not think anyone would figure out. It isn’t like Playboy is some small publication. There is a good chance that this thing will be settled out of court, because there is no way the man can win a multi-million dollar lawsuit.