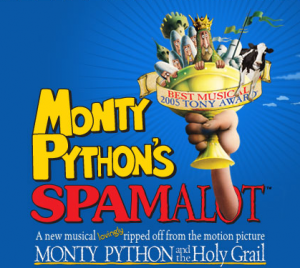 MONTY PYTHON’S SPAMALOT is returning to St. Louis! The show will play the Fabulous Fox Theatre again, for a five-show weekend engagement from January 7-9.

For more information and to purchase tickets, visit Metrotix or the Fabulous Fox Theatre website.

I had the chance to talk with the lead of the show, Steve McCoy, who plays King Arthur. Steve recently starred in the national tour of Man of La Mancha, and is thrilled to be a part of “Monty Python’s Spamalot” for the second national tour. I spoke with him about the show, the film it is based on, and what it’s like to be a part of something with such a huge following. 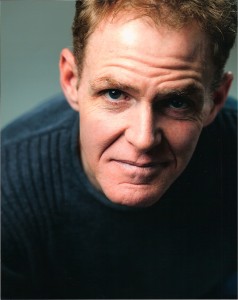 Kevin: How long have you been on tour with “Spamalot?”

K: Is this your first time being a part of the show?

S: It is my first time. It’s the second national tour; it had a Broadway incarnation first, then it went to England and did the show there. Then it had the first national tour, and this is the second.

K: So how did you get involved with “Spamalot” for this tour?

S: I auditioned like everyone else on the show, in New York, out of probably like 1200 people.

K: Do you live in New York?

S: I actually live right outside of New York, on Long Island.

K: I read a little bit about your background and the shows you have been in. “Spamalot” seems to have a little less serious tone than what you are used to. Is this a pretty big change from your usual roles for you?

S: Yes, recently. It’s a pretty big change from the recent stuff I’ve done. When I started as a kid, I was a chorus boy in musical comedies and stuff like that. But as I developed as an actor, the last couple of things I’ve done have been really serious. Which kind of helps in the show because when we were rehearsing, the director Mike Nichols and the assistant director, BT McNicholl, were saying that you have to play this for the truth of it. You have to play it very serious, or it’s not funny – which helped a lot.

It’s a crazy show, sight gags and crazy things, but unless you play it for the truth it’s not funny. The way it’s written – it’s so brilliantly written – unless it means something to you, it’s not going to be funny. But if you do play it like that is when it is hysterically funny.

K: I’m a huge fan of “Monty Python and the Holy Grail.” How close would you say this show is to the movie? 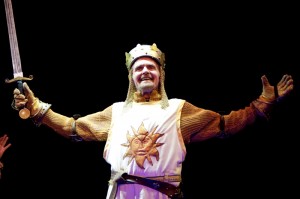 S: There are things pulled exactly from that movie, and there are things that were never in the movie. I would say it’s like half and half. I would say that the people coming to see the show are divided right in half; incredible die hard Monty Python fans, and people who have never heard of Monty Python – but know that it won the Tony in 2005 for best musical.

Half of it is taken right from the film, and half is written just for the show – which is a spoof on Broadway musicals in general.

K: So there is a little in there for everyone; diehard fans of the film are going to love it, and people who just love going to see theatre are as well.

S: Exactly. That’s why they were so brilliant in the way they wrote it. They were able to get everyone involved.

Most of the comedy comes from the words, and I thought most of it was kind of slap-stick, silly kind of humor. But that’s really not what it is.

K: I’m kind of the same way, and watched most of the big movies like ‘Holy Grail’ and ‘Life of Brian.’ But I never watched ‘Flying Circus’ until later, and now I want to go out and get the whole DVD collection.

S: Right, that’s exactly what I did. Once I saw the show in 2005, I went back and watch it and was like, “this is really funny. What was I missing?”

K: Do you find it beneficial to watch ‘Holy Grail’ when developing your character, or are you building your own King Arthur mainly from the script? 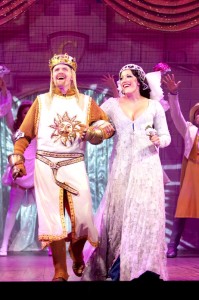 S: With this show, the writer and the directors did encourage us to do that. Because there is one rule, and that is: do Monty Python to make it work. Being an actor you’re like, “oh my gosh, I create my own character.” Often you do your own interpretation of a character. But really, with Monty Python, there is only one way to do it. And the director would be so specific, to the point where he would go, “you need to punch that word. It’s not going to be funny unless you punch that word.” And it would be that specific.

Originally, I was not fighting against it, but I never worked like that before. But it was so dictated to you, and it was exactly right. Our first show, everything they said would happen – happened. Every time they said we would get a laugh, we got a laugh. Every place they said, “if you don’t do it like this, it won’t work” – they were correct. So I definitely drew from the source material, but not copy him by any means. And sometimes in the audience, die hard Monty Python fans are upset because it is not an exact copy of the movie.

K: Tell me a little bit about the show, for people who haven’t seen it or watched ‘Holy Grail.’

S: England is in turmoil right now, and King Arthur needs to get it straight, and he’s on a quest to find the Holy Grail. God comes down and says, “I have a quest for you Arthur. You and the knights you have gathered – you need to find the Holy Grail.” One – Arthur really doesn’t know what that is. Two – he never really wanted to be king, he kind of fell into it. He needs some help, so along the way he meets this woman called The Lady of the Lake – who is the only female character in the show beside from the ensemble girls. She is kind of his guide as he gets into situations where he needs help. She is also the liaison of the whole kind of Broadway spoof.

K: I know in Monty Python, a lot of the guys play the female characters. 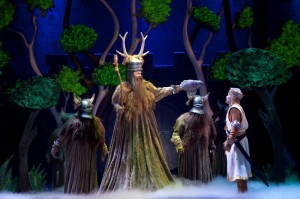 S: And that still happens in our show. There are like two or three other guys who play little character parts, the same way it was in the film. But she is a boneified woman; her name is Caroline Bowman. Sara Ramirez, who is on “Grey’s Anatomy” played it on Broadway and won the Tony for it. It’s really an incredible role; she’s the only female in the show manning the kick-ass songs. I would say I’m the lead of the show, but really it’s everyone around me who has the glowing parts – the really funny comedy that keeps the show moving.

Everything is in there, like the Knights who say Ni, and the Back Knight where we cut off his arms. That’s a huge stage trick. You know, all the stuff from the movie is right there on stage. It’s funny, you know the audience is full of fans when the Black Knight comes out and says, “none shall pass,” and people start applauding. Everyone around them, who has never seen the show, is like, “why is everyone clapping? What is going on, what’s happening?” It’s fun to have those mixes of people in the audience.

K: What would you say are your favorite parts about being in “Spamalot?”

S: Just being entrusted with the legacy of the story. We’re only really the third people to do the show, and to get the stamp of approval and say, “you guys are doing this really well. Go out and show the rest of the country what this is.”

Really, to get that big standing ovation every night, everywhere we’ve been. From Florida, to the Midwest, you are thinking, “Do they really like it?” In Canada, “Are Canadians really getting into this?” Or in Cuba. No matter where you are it’s fun; you go out and there’s joy and happiness. Just the fun of the show – if I’m in a bad mood, it doesn’t matter. By the end of the show, I’m happy. Everyone is just so happy.

K: I bet the show converts a lot of people into new Monty Python fans.

S: Totally. People who had no idea what it was before.

K: After being in this role, are you thinking of doing more in musicals and comedies, or do you think you will look for more dramatic roles?

S: I don’t know. I like doing both. I really like doing both. It’s a lot harder to do comedy. Comedy is a science; it’s a lot harder, but I enjoy the challenge. When you are doing something serious, you pull moments from your own life that coincide with what’s going on on-stage. It’s a totally different science, and I love doing it so much. I don’t want to limit myself, so whatever anyone is interested in seeing me doing – I would definitely take a stab at it. I’m just so grateful to have the chance to do this.

Performances of “Monty Python’s Spamalot” run from January 7-9. For more information and to purchase tickets, visit Metrotix or the Fabulous Fox Theatre website.