Molina for MVP? And Other Thoughts

Hello there. Hopefully everyone had a content Mother’s Day that saw the Cardinals take two out of three from the Butt Pirates after dropping the last three to Philadelphia. It looks like the road to the World Series is gonna have to go through Philadelphia.

If you’re one of the three readers of this post, you’re probably a little curious about the header. “But Steve, you have the world’s biggest mancrush on Pujols. And Pujols is leading Molina in pretty much every offensive category.” 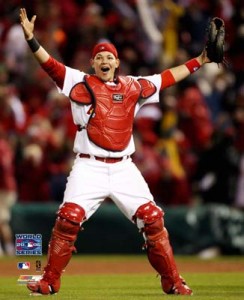 And this is mostly true. Pujols even leads the team with game winning RBI. But how many times recently has Molina come through in the clutch, with a go-ahead or game-tying RBI? Molina’s undoubtedly stabilized the five spot in the lineup with 22 RBI and a .301 average, taking some pressure off David Freese and allowing him to have (thus far) perhaps the best Cardinals rookie season since Pujols’ monster 2001 campaign.

On top of that, Molina’s played his usual stellar defense. He single-handedly pulled off a double play this weekend. His catcher ERA is .87 runs lower than the next best catcher (of all catchers qualifying for the batting title), appropriately enough his brother Bengie. And nobody’s running on him. Only Ivan Rodriguez and Joe Mauer have fewer SB attempts on him, and they’ve only played in 22 games each (Molina’s been in 29).

Obviously, Pujols is gonna put up monster numbers and be the sexy candidate for MVP. But at this point, it’s hard to think that anyone but Molina’s been the most crucial player for the team.

Aside from Molina, at the roughly 1/5 point of the season, the starting pitching has been what’s allowed the Cardinals to become the first team in the NL to 20 wins. The Cardinals still rank at the top of the majors in ERA, with a sterling 2.68 average. The Cardinals are also far and away the leaders in quality starts, with 28, meaning they’ve only had FOUR games in which the pitcher didn’t last at least six innings and give up three earned runs or less. I”ve had ex-girlfriends allow other teams of guys to score more. 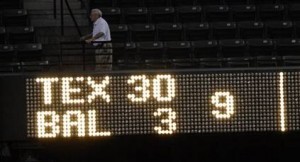 In the game of life, guess who's only got three? Wait...what'd I just say?

So, I’ve written previously about how I was at the 20 inning game and then at the game that lasted five and a half hours thanks to rain.

Guess what the weather forecast is for tomorrow?

And now, a break from the serious(ly)

If you haven’t seen or heard about this, it’s a sight to behold.

Will Ferrell, in town for a College for Cancer fundraiser (actually a terrific cause, providing scholarships for students who have had cancer), pitched (briefly) for the Round Rock Express, the Astros’ AAA affiliate. Under the guise of Rojo Johnson, I don’t think he’s gonna be called up any time soon. I don’t want to spoil what happens. Just watch the video and read the article.