Mizzou vs. Nebraska – The Weekend Ahead

If you’re like me, you’re an overweight Asian man who leads a sad, lonely existence. But, you also like football. Last weekend was one of the best in recent history for Missouri, taking down the top-ranked Oklahoma Sooners. This weekend offers a terrific chance for Missouri to show once and for all that it belongs in the national championship discussion.

Last week was supposed to be a lesson learned for Mizzou, at least according to the “experts.” All week long, we heard about how Mizzou was ranked too highly and how Oklahoma was supposed to put them in their place.

Saturday came and went, and at the end of the night,  Missouri emerged victorious 36-27. I was at homecoming with my pulchritudinous date, Elizabeth (she wants me to note that we are not dating. I think she’s ashamed of me most of the time.), but was monitoring the game closely and went nuts when the final clock ran out. 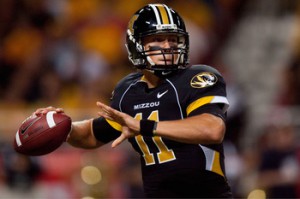 Blaine Gabbert throwing the ball, but not during the Oklahoma game, because I couldn't find one on Google Images and I'm lazy.

Pretty much everything that could go right for Mizzou did. To wit:

– Blaine Gabbert went 3o for 42 for 308 yards and a touchdown without throwing an interception. His relatively slow start has prevented his name from being mentioned in the Heisman race, but a big game and win Saturday could put him in the spotlight.

– When Nebraska shut down Mizzou’s top receivers, Jerrell Jackson stepped up and snagged nine receptions for 139 yards and a score. This is the second straight week a different receiver has taken up the slack after defenses have tried to shut down top receivers T.J. Moe and Malcolm Egnew. In the game against Texas A & M, Wes Kemp caught 10 passes for 89 yards and two touchdowns. In the last two games, he has 14 receptions for 160 yards.

– The running back-by-committee also worked, as Mizzou gained 178 yards on 39 carries. Leading the way was De’Vion Moore, who gained 73 yards on ten carries and scored a touchdown.

– The defense forced three turnovers and Landry Jones went 0 for 7 in the final decisive quarter. Aldon Smith made a successful return and even returned an interception 58 yards.

With the win, Mizzou went from being ranked eleventh to sixth in the nation and have entered the picture of being outside contenders for the national championship. Sound silly? Of the five teams ranked ahead of Missouri:

– #2 Oregon travels to USC, always a tough contest. Matt Barkley and the offense is capable of putting up big numbers.

– #3 Boise State has a softer schedule, but is stuck with the unfortunate luck of not being in a major conference. This will ultimately work against them, as Auburn and Oregon both leapfrogged Boise State, who has done nothing but win.

– #4 TCU has the same problem as Boise State. The only real challenge ahead of them is traveling to #8 Utah, another undefeated team.

– #5 Michigan State travels to Ames, Iowa, to face #18 Iowa this weekend. Many of their victories have been unimpressive as well.

First, however, Missouri must get past Nebraska, whom everyone picked to win the Big 12 North. Of course, “everyone” *cough*ESPN*cough* picked Oklahoma to win last week. Nebraska is a tough defensive team, and last week they tore apart Oklahoma State, who was ranked 14th. Taylor Martinez established himself as a true dual threat rather than solely a terrific runner, throwing for 323 yards and five touchdowns while also running for 112 yards. Last year, Mizzou held a 12-0 lead in the fourth quarter before things fell apart following an ankle injury to Gabbert.

What Mizzou must do to win

Contain Martinez. Martinez has the ability to turn a broken play into a huge gain. Mizzou has to get pressure on him and contain him in the pocket, forcing him to throw it against Mizzou’s strong secondary. Martinez might throw for a lot of yards, but he’s not immune to making mistakes. Before last week’s game (against a weak Oklahoma state secondary), his previous high for passing yards this season was 150 yards.

On the other side of the ball, Gabbert has to assert himself as being better than he showed Nebraska last year. Originally a Nebraska commit, he’d love to show them what they’re missing. The main key to the game tonight, as always, is the offensive line play. Last week, Mizzou absolutely crushed the Oklahoma front four. They opened lanes for the tailbacks and gave Gabbert more than enough time to make accurate throws. Without Ndamukong Suh bullrushing the passer, Nebraska hasn’t been as successful this year getting to the quarterback, but still has a solid defensive front. Win the trench battle, win the clock, and Mizzou can win this one. Once again, the so-called experts aren’t giving the Tigers any respect. Wouldn’t you love to see Missouri rise to the top 5?

I think an interesting wrinkle for Gary Pinkel and staff would be to introduce backup quarterback James Franklin in for a few series, especially if Gabbert seems to struggle. Franklin is a true dual threat, who in limited duty has completed 11 of 14 passes for 106 yards, 1 TD and 1 INT. He’s also run 14 times for 78 yards and two scores. Bringing him in a couple of times could force Nebraska to readjust its defense. It’s doubtful it’ll happen; preferably, I’d like to see him, but in mop-up duty.