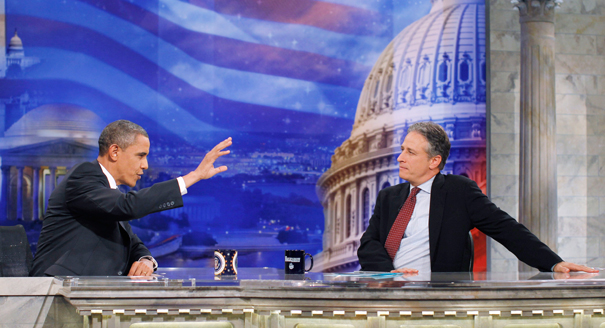 US President Barack Obama became the first sitting President to come on Comedy Central’s The Daily Show with Jon Stewart.  The whole episode, which was filmed in DC as Stewart prepares for his Rally to Restore Sanity, was dedicated to Obama’s appearance.

Love him or hate him, Stewart did his best to hold Obama accountable for not sticking to all of his campaign promises. I was sure the interview would be entirely one sided, and would give Obama a large platform before the mid-term elections. However, Stewart truly seemed to want answers to some questions that have been burning in many our minds for the past year.

I try to keep my politics separate from ReviewSTL, but I absolutely agree with some of the things Obama is saying. Some of the legislation he has seen passed in his tenure has been historical, but Stewart points out that some of it isn’t enough. The Democrats also seem to be shying away from the pieces of legislation they have passed.