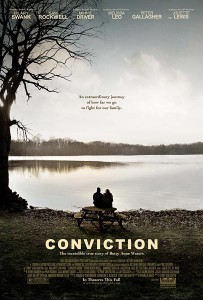 Conviction takes a fairly remarkable true story and makes it incredibly bland and familiar, only shining when Sam Rockwell strolls onto the screen.

The story follows Betty Anne Waters, a small town girl who has a strong bond with her brother, Kenny.  Kenny has been in trouble with the law time and time again and when an old women ends up murdered in their town the finger falls on him.  After seemingly getting around the charge a line up of character witnesses suddenly appear proclaiming Kenny has often bragged of the murders over the passing couple of years and Kenny finds himself behind bars.  Betty Anne, believing profusely in her brother’s innocence, sets down a path to try and get his name cleared and the journey will take her places she never thought possible for herself.

True stories like this are often deemed “awards bait” and to be quite honest I hate that term.  Whether a film is lined up to try to appeal to the award seasons is beyond the point of assessing a movie and one I never take into consideration personally when writing a review.  I mention this because I am sure a lot of people will write this film off or sing its praises because of what it does as a potential “awards caliber” film.  I just want it to be clear that I don’t like the film because I feel like it is, some how, an incredibly formulaic and uninteresting film.  Why the ‘some how’? As I mention in the opening, the true story this is based on is a pretty unique and remarkable tale but the film never feels remarkable unless Sam Rockwell is on the screen.  Rockwell is fantastic, as always, here and he creates an incredibly likable character that you can’t help but not trust completely all the same.  As Kenny and Betty Anne meet in those prison meetings Rockwell perfectly sells us on what Kenny is going through in his brief moments.  Elated, depressed, suicidal, Rockwell does so much that he is able to sell the audience on so much stuff that is only mentioned or barely shown.  Like Betty Anne, Rockwell was the only thing keeping me going with this picture and he is the only reason the film is worth watching if you ask me.

The film is just too on the nose with no subtlety in every scene not involving Rockwell as characters spout out exactly how they are feeling or what we should be reading into the scene.  Minnie Driver and Hilary Swank are both fine in their roles but their characters are just so one note and stereotypical that there is no complexity to them at all.  It doesn’t help the matter that their (Driver and Swank) dialogue together feels very sitcomy and while the proceedings need some levity these humorous interludes never feel quite right.

In the end, Conviction just never really feels like anything special.  It is finely acted and the real life story it is based on is pretty incredible the film just never captures us the way it could.  The film lacks a real big moment in its third act, and while that isn’t the film’s fault as it has to follow reality, it doesn’t help things come to an emotional conclusion.  In fact, most of the emotional beats in the film fail to really resonate unless Rockwell is involved and he can’t even save it some time.

In the end, Conviction falls short of its potential and won’t blow anyone away.  You could do far worse than Conviction but I can’t really recommend it beyond Sam Rockwell’s great performance.  The film doesn’t elevate itself enough or do anything interesting with this kind of amazing true story and it is a shame as the story is one worth knowing.  So if you are going to pass on the film I would still tell you to seek out the Waters’ story as it is a unique tale of never giving up, I just wish this film was able to capture this story’s magic beyond one great performance.

Conviction is a C-