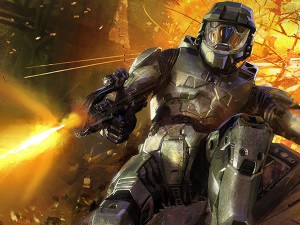 Halo is once again video game king as the impending release of Halo: Reach comes closer. Microsoft and Bungie Studios both see the potential in the product for spinoffs into film, and now they are possibly looking at making a jump into the world of television.

“We’re still interested in making an excellent ‘Halo‘ movie,” Microsoft’s Frank O’Connor said in an interview with Variety. “We’ve created an awful lot of documentation and materials to support a feature film. We have a good idea of what kind of story we want to tell, but won’t move on it until there’s a great reason to do it. We’re in no particular hurry.”
The plan is to tell a story that adds to the mythos of the world of Halo, rather than recreating the game verbatim. Microsoft is also “intently watching the TV landscape” for opportunities to market and sell the Halo experience.
I’m all for a Halo movie, and if it had the proper budget I’d gladly watch a show as well. It is a pretty smart move on Microsoft’s part to tell a story that isn’t an outright retelling of the Halo games, because as fun as the games are, the stories are no where near intriguing enough to make a satisfiable film. The groundwork is there, and that is all they need to make a successful film franchise.
What do you think? Let us know in the comments!
Facebook Comments Box