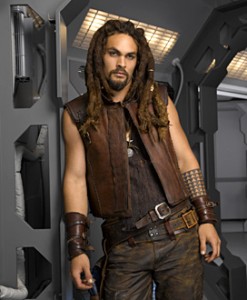 Sean Hood has been hired on by Lionsgate to do a quick rewrite of the new Conan the Barbarian film before it starts filming on March 15th.  The film will be directed by Marcus Nispel, and will once again tell the story of the mythical conqueror Conan the Barbarian who is on a quest to avenge the death and slaughter of his people.

Playing the lead role is Jason Momoa, and a younger version will be play by Leo Howard. Hood will be touching up the original script by Thomas Dean Donnelly and Joshua Opppenheimer.The character was created by Robert E. Howard in a series of books.

Also hired on was Mickey Rourke who will be playing the title character’s father.  Who will join the cast when the film starts production in Bulgaria on March 15th.

I feel bad saying this, but I haven’t watched the Conan films since I was a kid, and even then all I understood was that Arnold Schwarzenegger was about the coolest guy around. It looks like I need to go back and watch the originals before this new film comes out. Maybe I’ll read some of he novels as well.