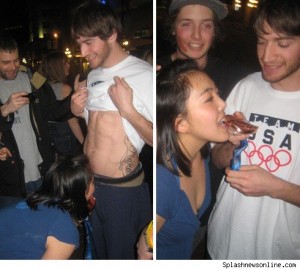 I’m sure by now almost everyone has heard of bronze medal snowborder Scotty Lago, and his “racy” party pictures. The worst part about the whole thing is that the talented athlete was kicked out of the Winter Olympics, after a life worth of training, for something that wasn’t even that bad. I mean, come on – I would understand if it was the roaring 20’s. But seriously, in 2010 I think that people are a little more lenient.

Scotty Lago was forced to leave the Winter Olympics after photos were released of him, his bronze medal, and a girl suggestively kissing it. Were they the most tasteful pictures? Maybe not. But they weren’t even close to being as offensive as the Olympic Committee made them out to be. 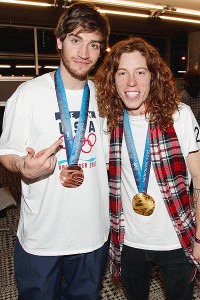 Scotty Lago and Shaun White Hold Their Olympic Medals Together at the 2010 Winter Games.

Scotty Lago is not allowed to speak about the situation until March 3. It will be interesting to hear from him, and get his side of the story. The saddest part is that the snowboarder has achieved something that few athletes ever get the chance to be a part of, and yet he has been sent packing. It is a shame that a bunch of uptight committee members have to ruin something so great, all on account of some mild photos.

When Scotty returned home he tweeted, “Got home this morning to all my homies. Such a good Olympic experience. Keeping my medal in a safe spot for now haha.”

U.S. Ski and Snowboard Association President and CEO Bill Marolt said, “Scotty Lago is a great athlete, but with that comes a responsibility of proper conduct, and his involvement in this situation is not acceptable.” I understand that they want to keep everything prestigious, but I think they are being a little ridiculous. It seems like they are really trying to make an example out of him to all of the other young athletes that compete in the games. Marolt goes on to say, “Scotty realizes his conduct was inappropriate. He has formally apologized and also made a decision to leave Vancouver today.”