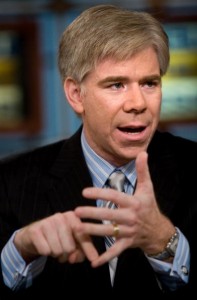 Fmr. Sen. TOM DASCHLE (D-SD)
Senate Majority Leader 2001-2003
Author, “Critical: What We Can Do About the Health-Care Crisis”

A Special Edition: Making sense of health care. As anger reaches a boiling point at town halls across the country, health care reform takes center stage. What are the issues at the heart of the debate? How would reform affect the care you receive? We’ll help separate fact from fiction through an in-depth look at the debate with some leading voices: Fmr. House Majority Leader Rep. DICK ARMEY (R-TX), now the head of FreedomWorks, an organizer of protesters at town hall meetings; Sen. TOM COBURN, M.D. (R-OK), Member of the Committee on Health, Education, Labor and Pensions; Fmr. Senate Majority Leader TOM DASCHLE (D-SD), an informal adviser to the White House and author of “Critical: What We Can Do About the Health Care Crisis”; & RACHEL MADDOW, Host of MSNBC’s The Rachel Maddow Show. Plus we’ll get perspectives from around the country with Rep. CHARLIE RANGEL (D-NY); BRUCE JOSTEN

, Executive Vice President of the Chamber of Commerce; and Gov. BILL RITTER (D-CO).

Join our “Meet the Press” fan page on Facebook: http://tr.im/rCUn