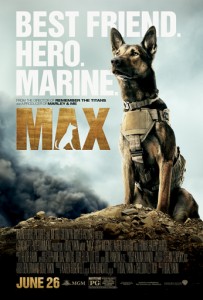 I’m a sucker for dog movies, I admit it.

I cry like a little bitch at the ASPCA commercials, so maybe my take on “Max” isn’t as reliable as some heartless asshole’s take.

Dog lovers will devour this movie and be left begging for seconds.

“Max” is a German shepherd, that was trained by the military to assist in weapons finding missions.

It just so happens that Max’s trainer/owner is shot and killed early on in the movie.

Parent’s need not worry, there is nothing shown that your child hasn’t seen on Sesame Street. The film is rated PG, so what little violence there is, is nothing to get up in arms about.

Honestly, I expected to cry nearly the entire film, but was pleasantly surprised that the film is more of an adventure than a 100-minute ASPCA commercial.

Director Boaz Yakin is best known for “Remember the Titans,” the Denzel Washington football movie that touched on racism. Loosely based on a true story, Titans plays more like a 100-minute sappy Lifetime Movie of the Week. Effective for a class project on segregation, but not-so-much for a football fan like myself.

Once Max’s owner is shot, the dog is sent back to the family, as it is suffering from Post Traumatic Stress Disorder. Yes, this can happen to animals.

The dog and his new caretaker, Justin, the brother of the deceased soldier, become best of friends. Cue the Lassie theme.

While the film is predictable and a bit far-fetched at times, it’s still fun for a summer movie, especially for the family.

I don’t even have kids, but I enjoyed it.

Josh Wiggins, as Justin, and the dog are the real stars of the film. The pair have great chemistry together on screen.

In the end, “Max” will not win any awards, but with the weather getting hot and humid, parents may be looking for a film that they can enjoy with the family. “Max” is definitely the family film of the summer. If you’re not careful, the kids will probably be screaming for a new pet German shepherd as you leave the theater.