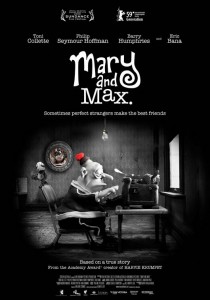 Mary and Max is another quality animated entry from 09 which has proven to be one the strongest animation years in the history of cinema.

This stop motion animated tale is inspired by the director Adam Elliot’s experience with a pen pal and focuses on a long lasting writing relationship between a young girl in Australia, Mary, and a randomly selected man out of the phone book, Max, who lives in New York City that begins in 1976.  Mary is a bit of an odd duck loner who makes her own toys and sends most of her time to herself.  Max is a twenty something loner himself who shares a love for the same television program as Mary but also has aspergers and works a smattering of odd jobs and has a variety of awkward experiences.  The two’s correspondence starts as a simple cute correspondence, but soon grows into a true friendship, sending each other sweets and presents, before taking an unexpected turn as Mary ages into a woman.

The film looks fantastic and the models, sets, and characters are not just wonderfully animated but given a unique look and style that gives the picture its own unique look.  Elliot also manages to work in a lot of creative shots and the film is full of impressive camera work that is right behind the work of Selick and Anderson in this years other stop motion greats, Coraline and Fantastic Mr. Fox, respectively.  The use of color is also very clever here as well and helps to differentiate and give New York and Australia each a distinct look and feel that influences our mood and opinion on the lives of each individual.  Max’s world is grey, cold, and dreary, and while Mary’s life isn’t all that much more exciting, her story seems more alive and hopeful.

Elliot also went out and got some great actors to play Mary and Max and both are almost entirely unrecognizable.  Max is played by Phillip Seymour Hoffman who creates a wholly original voice and character that is incredibly believable and sad.  Hoffman is one of my favorite actors and this voice work is some of his best work period as he disguises himself as Max.  Mary is played sweetly by Toni Collette and Bethany Whitmore and both do a great job playing the older and younger iterations of the character.  Eric Bana even has a couple good lines of work as a love interest for Mary.

The real charm and effectiveness of the film though is its serious subject matter and adult themes told with lightness and a caring touch that can be attributed to both the animation and wonderful writing and direction of Elliot.  Full of poignancy, silliness, and serious beats it will touch you on a broad emotional scale and really allow you to connect on a number of levels.

In the end, Mary and Max is wonderful little story crafted expertly by Adam Elliot.  A film full of laughs, tears, and originality it is impressive both visually and in its story telling while featuring some fantastic performances.  Phillip Seymour Hoffman continues to prove how great an actor he is, creating a character with his voice, not simply lending it, and is reason enough to see the picture.  But there is plenty of beautiful animation, story, and moments beyond Hoffman and Mary and Max is another brilliant effort in a banner year for animation.

Mary and Max is an A-