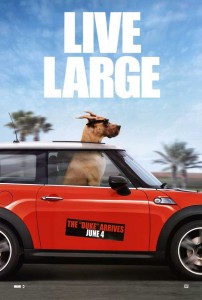 If I was to tell you that there was a new film with Owen Wilson, Fergie, William H. Macy, George Lopez Keifer Sutherland and Emma Stone in it you would be in line to buy tickets by now. That is until I tell you the only one acting is Macy. Tom Dey who last worked with a horse (sorry SJP) in ‘Failure to Launch’ has now brought America’s favorite comic canine to life, MARMADUKE.  Every actor listed about provides vocal talent to the B-list talent actually showing their faces on screen. The only thing that reminds us of the whimsy  cartoon from the Sunday Papers is Phil Winslow’s (Lee Pace) screams of “MARMADUKE!!” as the Great Dane gets into more trouble. These cries are way too few and far between for this dog.

The story surrounds the Winslow’s moving from Kansas to the sun and surf of Los Angeles. Phil has a new job in a pet food company that has a chance to land its products at PETCO. So Phil loads up his wife Debbie (Judy Greer), and his three kids Barbara (Caroline Sunshine), Brian (Finley Jacobson), Sarah (Mandy & Milana Haines) and the family pets Carlos the cat (George Lopez) and Marmaduke (Owen Wilson) and they are O.C. bound. The film then becomes every high school peer pressure movie ever made only this one uses talking dogs. Have you heard the expression “you talk too much and you never shut up”.  This applies to the dogs in MARMADUKE!

Yes kids will like this just for the silly CGI things the dogs do (surfing, dancing and throwing a rave!) but adults will be bored stiff 20 minutes into the film. The film is also very predictable and misses out on the things that would have made this a really good film.  First, less dialogue from the four legged folks. We need to see more of Sarah Winslow, and how she is with Marmaduke. They always show Marmaduke in and around town at all hours of the day and night, how does he get out of the yard? For that fact all the dogs have free reign of downtown LA, you may want to watch where you step! Lastly the writing must have been rushed or they skimped on that part of the budget, it is baaaadddddd!

Again some really young kids will think this is ok (some). There are also those elderly dog lovers that own all the talking dog movies on DVD (Mom) that will like it. But I would recommend you wait, it won’t be long at all, for this pile of Marmaduke poo to hit the DVD shelves.

I am Karl the Flick Fanatic, glad for two things, my dog Spicy is smarter than everyone in Maramaduke and that I never have to see this again now that it’s a wrap!