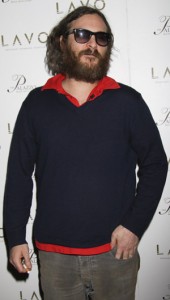 Not to be confused with MTV's upcoming Teen Wolf project.

Over the past couple years Joaquin Phoenix has appeared slightly crazy. (By slightly I mean very.) Many people have suggested that the act was all a hoax, and almost everyone hoped it was.  His appearances always resulted in the same mumbling responses, while Phoenix looked highly disheveled.

Now it has been announced that Magnolia has picked up the rights to I’m Still Here directed by Phoenix’s brother-in-law Casey Affleck. The story is described as  “a striking portrayal of a tumultuous year in the life of internationally acclaimed actor Joaquin Phoenix.”

Sometimes funny, sometimes shocking, and always riveting, the film is a portrait of an artist at a crossroads. Defying expectations, it deftly explores notions of courage and creative reinvention, as well as the ramifications of a life spent in the public eye.

Will Phoenix be able to bring his career back after this highly unusual project? Let us know what you think in the comments!