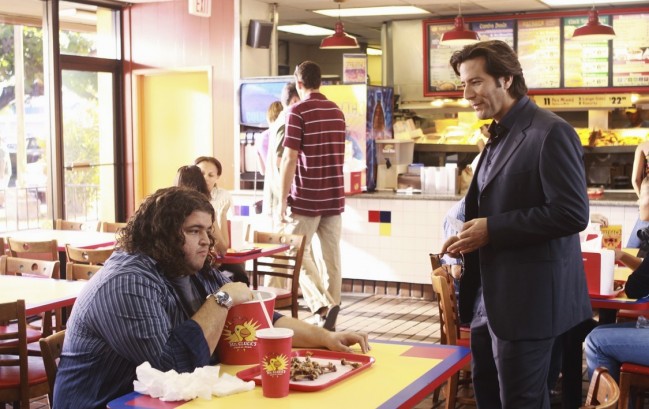 OK, it has been a couple days now, so I will spare you any elaborate recap and just get to my thoughts on the episode.

I love the way the Sideways world is developing. This was a fantastic next step following the revelatory Desmond episode last week. Libby and Hurley are the perfect characters to bridge this connection even further, and illuminate things while still keeping an air of mystery around what is going on.

The film is also probably the funniest episode of the season so far, adding plenty of humor in both parts of the story. I also like that Desmond is around still pushing the pieces, and I hope he stays in this role as the series winds down. How aware is Desmond of his Island existence? I wonder, as he had named his son Charlie.

I wonder if the Libby reveal back in season 2 at Santa Rosa will somehow play out as a sideways world connection.

I loved the scene at the well between Desmond and FLocke, though I am having a hard time figuring out what the hell is going on with Desmond. I wonder if he has Widmore in his ear, or if he is just trying to finish his time with the Island so he can join Sideways world.

Where was Hugo’s dad? Will we even ever find out?

And what about Desmond running down Locke and Sideways world? Retaliation for the well toss through the cosmos, or is he trying to get him in “touch” with Jack at the hospital?

It was really nice to see Libby again, especially with Cynthia Watros doing such a fine job in the episode.

I do have a couple complaints on my mind though:

-Seriously, that’s it for Illana? It was surprising that she blew up, but not at all impactful because she didn’t do a whole lot. I bet she comes back in some capacity.

-Also, stop splitting everyone up. Can we please get more time with Sawyer? We have had far to little lately, after a good start at the beginning of the season. And things are just so scattered on who we will see each episode, and for how long. Character distribution just seems a bit out of balance, and that is my biggest complaint of the season.

OK, enough for now. See you next week with hopefully a more timely posting.