Count me as one of the proud few who stayed for the entire game today. Tonight? Yesterday?

All 20 innings and seven freaking hours of it.

I’m sure most of you thought it was a crappy game, filled with missed opportunities, mistakes, and scorecard mismanagement by Tony LaRussa. All of the above may be true.

But this game lent credence to the axiom that something can always happen in baseball that you’ll never see again.

Great defense on the Cardinals’ part? Check. Craig made a terrific diving catch in left field. Pujols’ quick thinking prevented an errant throw into something more serious. Molina gunned out a baserunner to end…I don’t even remember which inning it was. The 18th? How absurd does that number sound?

The Cardinals definitely will take some lessons from this game. They stranded entirely too many runners on base. They had an opportunity to win the game with runners on second and third with NO OUTS, and let it slip through their fingers after Schumaker and Ludwick struck out in succession. With first base open, Pujols was intentionally walked, and Blake Hawksworthe struck out.

Tony’s decision-making tonight might certainly raise some eyebrows. Pulling Holliday out of the game early certainly hurt the Cardinals’ chances, and he’s always been very quick to pull pitchers after particular situations. Today’s game demonstrated how that can often backfire. Also, I would have liked to see Bryan Anderson get more of an opportunity to play. Certainly, Yadier came through with the hit in the 19th to tie the game. But without a doubt the guys who stayed in the game the whole time are going to be worn out today: Schumaker, Ludwick, Pujols, Lopez, and mostly Molina.

Jaime Garcia could very well be the real deal. Two solid starts in a row, and tonight he was on fire. Only one hit in seven innings pitched (in fact, the Cardinals kept the one hitter through the 12th inning). The Cardinals are gonna have to watch his innings this year and use him carefully, but…damn. We might have found ourselves a top-of-the-rotation compliment to Adam Wainwright once Carpenter’s contract expires.

On top of that, it was just plain fun to see the positional switches at the end. Lopez lobbing batting practice in there (and actually pitching to contact quite well). Mather with a catcher-style release. Granted, he did get the loss. But YOU try pitching to a major league lineup and see how you do. Lohse in the outfield, making the catches on the balls hit to him, including one down the left-field line that forced him to cover a lot of ground.

My mind is still reeling from it all.

Beauty can take different shapes. Just because the game didn’t result in a win doesn’t mean it wasn’t enjoyable. It was by far one of the most memorable games I’ve ever attended.

I have to throw in some of my own personal experiences from the game. I was fortunate enough to get a couple of tickets from the lovely ladies of the UMSL Zeta Tau Alpha chapter. I brought my friend Kaitlin with me, so for the first nine innings, it was essentially me and 30-odd girls sitting in two rows at the game. (No, I’m not calling the girls odd.) I think I know what heaven’s like.

As the game dragged on and the day got colder, most of the Zetas left until it was down to me, Kaitlin, and two of the Zetas, Hannah and Jen. We huddled in the cold and scavenged for food, resorting to eight-inning-old nachos that one of our friends had left. Gross now, yes; at the time…well, any port in a storm. 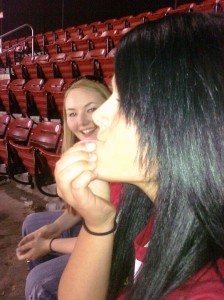 Hannah demonstrating her whistling. How she does it, I have no idea. This is how we entertained ourselves at times.

Eventually after we walked around in the seventeenth inning, we moved from our seats in the upper terrace to Big Mac Land where we encountered exorbitantly drunk guys harassing Jason Bay. It was absolutely hilarious and annoying at the same time. Eventually, the most belligerent guys were forced to leave by the police.

So…yeah. Even though the game ended up in a loss and pretty much destroyed my plans for the evening, it was absolutely worth it. We were a little worn out by the end, I think, but the four of us who stayed managed to remain entertained and amused throughout. It’ll be interesting to see how the game tonight proceeds, as both teams absolutely taxed their bullpens. But I want to thank the Zetas and my friend Kaitlin for an absolute blast.