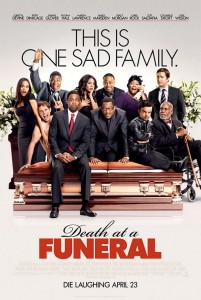 Chris Rock and Martin Lawrence head up an all-star cast in Death at a Funeral. Rock and Lawrence play Aaron and Ryan, squabbling brothers whose father has just died. Aaron has spent the days since his father’s passing planning (and bankrolling) the elaborate funeral and he is frustrated with his brother, a celebrity author, popping in and stealing the spotlight. As family and friends begin to besiege the service a comedy of errors ensues: attendees accidentally take an unnamed hallucinogen mislabeled as Valium, a wheelchair-bound elderly man experiences incontinence and the deceased’s gay lover (who also happens to be a “little person”) makes an unexpected appearance. It’s like the film has been constructed entirely from outtakes of America’s Funniest Home Videos.

Director Neil LaBute is an odd choice given the material. Perhaps best known for In the Company of Men and Your Friends & Neighbors, LaBute’s films are typically frank, bleak and controversial treatises on the nature of interpersonal relationships. Misanthropic at best, misogynistic at worst, the worlds he creates are tend to be desolate, lonely, mean-spirited places where the weak are taken advantage of and only the ruthless are rewarded. In short, the, um…perfect choice for a no-holds-barred farce. He has admittedly assembled a strong cast.

In addition to Rock and Lawrence, the film also boasts Peter Dinklage, Ron Glass, Danny Glover, James Marsden, Tracy Morgan and Luke Wilson. However, everyone seems to be sleep walking through the material. Rock and Lawrence are positively subdued compared to their usual on-screen personas which, in and of itself, isn’t necessarily a bad thing. But a film of this nature calls for exaggerated performances and we get very little of it. The sole exception is Marsden whose character is the initial recipient of the aforementioned hallucinogen. It isn’t until halfway through the film when you realize that Marsden’s character, after mistaking a lampshade for food, is literally chewing the scenery.

The film peppers its audience with jokes and (overly) broad comic situations, but few of them work. Much of the (alleged) comedy is of the lowest-common-denominator: crotch-hits, poop jokes, gay panic and drug humor. For me, farce has always been a genre that works better live. It has a frenetic nature that builds throughout. Actors must hit their marks precisely. Entrances and exits need to be perfectly timed. Pratfalls take on an increased element of peril. The entire proceeding takes on a razor’s edge quality that is typically lost on film. Much of the humor from live farce is derived from the suspense of whether or not the actors can maintain the tightrope walk. When you know that the cast has the benefit of multiple takes, and the filmmakers have the luxury of editing, the anticipation is removed from the equation. The lack of danger combined with weak jokes makes for a tedious 90 minutes. In all fairness, people in the audience were laughing. I just wasn’t one of them.