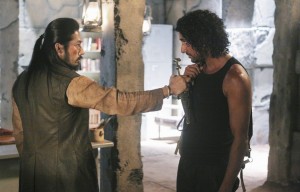 So, the Castaways have left the temple!  Sundown, the sixth episode of LOST’s final season, follows Sayid both on and off the Island and MIB/Flocke has made a huge play that has reshuffled the season for the run up to the end.

We will start off the island in the sideways world as usual with these recaps, and I pardon myself early for the brevity because I am a tad under the weather. (Or are you happy to have these shorter?)  Anyways, Sayid heads off to see his long lost love Nadia only to find that she has two kids with Sayid’s brother, Omer, and that Sayid and Nadia seem to have some how missed their chance at love.  Sayid soon finds out that Omer is in some financial trouble as he took a loan from some nasty folks who seem to be for blame the next day when Omer ends up in the hospital after being, “mugged”.  Sayid decides to stay out of his brothers affairs per the pressings of Nadia and his own desire to repent for his crimes in the Iraq war only to have trouble find him.  Picked up by a pair of hooligans, Sayid is taken to a restaurant to meet with the head honcho, a Mr. Keamy (our favorite freighter mercenary), which Sayid quickly flips the tables on them, killing the two guards and Keamy to find Jin locked up in the freezer of the restaurant they are in. Bullet Me:

-Now, this was the first sideways story to be more focused on setting up a multi episode story with than just looking at the castaway’s alternate lives.  I wonder if we will start seeing a more connected story from here on out or a mix of closed off stories and a running of these stories together.

-Sayid’s guilt is interesting here and even though he does fold to the killer inside him at the end, I think that is was more in the interest of protecting Nadia and the kids than a bloodlust that comes out of him in the other timeline.

-I like how Keamy is bad in both universes as well; he fits so well into these gangster shoes though.  Hopefully we get more of him in the Jin episode down the line.

Not much else going on in the sideways world, but it was a solid entry again for the sideways universe and it seems like it is signaling a change in how these parts of the episodes will be handled from here on out and start connecting them on more than simple encounters.

ON TO THE ISLAND!

So, Jack and Hurley are stuck up at the lighthouse and are MIA this episode but pretty much everyone else is on hand at the temple for the Man in Black’s arrival and he has a bunch of messages for the local Others.  After Dogan and Sayid rough it up in a kung fu fight, MIB sends Claire into the temple to request Dogan’s presence outside the island.  Dogan doesn’t bite, suspecting the MIB will kill him if he leaves the temple, and sends Sayid with instructions to stab the MIB on sight.  MIB takes the stabbing without a hitch and hands Sayid his sword back, calmly explaining to him that Dogan was hoping that he (the MIB) would kill Sayid, and hence trying to get someone else to kill Sayid again.  MIB offers Sayid a chance to have the one thing he always wanted, even if she is dead, if he delivers a message to the Temple.  The message is this, anyone who leaves before sundown is now free, as Jacob is dead, and anyone else left inside will die.  In the meantime, Kate worked her way back into Temple was surprised to find Claire and told her that she took Aaron off the island.  Sayid pays a visit to Dogan after delivering his message for MIB and after a sorrow confession of his past Sayid drowns Dogan in the healing pool and slits Lennon’s throat when he confronts Sayid over his murder.  Then all hell breaks lose as Smokey comes busting in, Lennon said Dogan was the only thing keeping MIB out, and every other that didn’t leave, and a lot left, end up dead.  In the mayhem Ben, Ilana, Sun, and Lapidus show up on grab Miles, heading out of the temple the same way Jack and Hurley did leaving Kate behind with Claire and a gleefully sadistic looking Sayid as they join Flocke and his new following of Others into the jungle.

-Sayid has officially lost it, what ever Flocke told him/or showed him hit home as he scared the shit out of Ben in a brief encounter as he sat looking at his victims in the healing pool, creepy.

-Poor Dogan and Lennon, I don’t want them to go, especially Dogan.

-The show seems to be done with the Temple and we are heading back into the jungle with Flocke and I have no idea what is going to happen next.

-Kate is in quite the tight spot now that Claire knows the truth about Aaron, and what will be the repercussions of Jin lying about Aaron when Flocke and his flock get back to wherever Jin and Sawyer are being held/hiding.

-What is up with The Others being such followers by the way?  They joined the entourage of the perceived evil MIB in quite a hurry.

-Really, Dogan and Lennon are gone? So sad.

-This was another solid episode on the Island and I can’t wait to see what MIB shows us next.

Ok, I am sick and tired, time to wrap this up.  Not a whole lot of reveals this week but it has pushed the show out of set up mode and we will probably be firmly on our in a classic Lost sprint to the finale as soon as next week.  And it looks like a Ben episode!, show it to me.