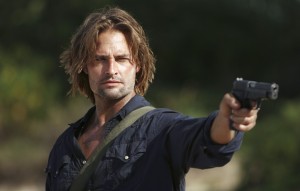 Lost’s 9th hour was a Sawyer flash sideways episode and turned in some of the best material from either of the plot lines this season and sets up a couple final pieces before all hell is going to break loose; I am assuming after next weeks hotly anticipated Richard Alpert episode is when everyone’s plans will get put into motion.  Also the title of the episode is Recon, which is a signal to where we are in the season story I imagine, Recon is right before the battle.

First, the sideways story opens on Sawyer who is pulling an all too familiar con for viewers of the show.  Though this time when he gets called on it he says he is working with the cops and we quickly find that he is actually a cop and not just working with him and that Miles is his partner.  James has a secret though and Miles can tell he is holding something back as he over hears Sawyer calling a bunch of Anthony Cooper’s in the phonebook.  Miles sets up Sawyer with a date before pushing him to confide in his partner and letting Sawyer know he can tell him anything.  Sawyer’s date is with our freight folk red head Charlotte and the two hit it off all the way back to Sawyer’s place.  Charlotte comes across a folder in Sawyer’s drawer marked “Sawyer”, looking for a shirt to spend the night in, and when James walk’s in on her looking at it he flips out and kicks her out.  The next morning Miles confronts James after he finds out that he was lying about his vacation to Florida and pushes James to spill why he went to Australia and lied about it.  Sawyer basically tells Miles to go f’himself and the two’s partnership seem to be over.  After a night alone and a little too much Little House on the Prairie Sawyer decides to try and reconcile with Charlotte, but she informs him he blew it, though Sawyer has better luck with Miles when he confess’ about his childhood and that he plans on hunting down and killing Cooper when he finds him.  The big surprise comes when a car smashes into Miles and Sawyer after their little moment and the driver runs out, on the run from the cops, and is chased down by Sawyer to reveal that it is Kate on the run.  Some bullets:

-I would definitely watch a Miles and Sawyer spin off cop show, they rocked together

-I wonder when Juliet is going to show up, I guess that will be later for Sawyer

-Does the sideways world culminate at the Locke wedding and cause the world to implode by to many castaways in one place?

All around this was probably my second favorite sideways story yet and it is great to see Sawyer happier in life even if Cooper is still a thorn in his side.  To the Island:

Back on the Island, Sawyer and Jin are waiting for FLocke and Claire to get back and Jin’s attempt to run off is foiled by the arrival of Smokey and his band of merry Others.  FLocke gets the group on the move and quickly sends Sawyer on a recon mission to Hydra Island to check on the other Ajira passengers and the plane itself as it is their ticket out of there.  Meanwhile, Flocke uses this time to talk to Kate and diffuse the tensions that arose after Claire tried to kill Kate for “stealing” Aaron.  Kate tries to get to the bottom of Smokey and the MIB opens up to her about his mother, and how she was crazy, and that he is now worried about Aaron and his crazy mother.  Claire comes to her senses after a talk from FLocke that Kate was simply protecting Aaron and not trying to steal him; which ultimately leads to the two ladies hugging it out.  Sawyer back on Hydra Island finds everyone from Ajira dead except one woman who he quickly sniffs out to be a mole for Charles Widmore.  Sawyer offers Widmore a deal that he will bring FLocke to Hydra thinking the cost is clear and after shaking that deal turns right back around tells Smokey about Widmore and the assumed deal so that they can catch Widmore off guard when they show up ready to fight.  Sawyer hunts down Kate and lets her know that he is playing FLocke as well and that he has  no plans to fight with him and he hopes to hop in Widmore’s sub and finally get off the Island. Bullets:

-I don’t know if I trust Sawyer in that he has revealed his full plan, especially because I don’t know how much he cares about getting Kate off the Island

-I am ready to believe and buy into everything FLocke says again, he is so damn persuasive

-Claire is still bat shit crazy and one of the few wild cards on the show, can’t wait to see where she goes next and if Smokey kills her to keep her from Aaron in the end

-Who/what killed the other Ajira flyers?  My bet, Smokey, yes even though I am willing to trust him

-Will we ever find out why all these other people have been so expendable on the Island and why they were destined to be collateral damage on the Island?

-Does the show end with Widmore and Ben supplanting Smokey and Jacob, respectively?  I like this thought.  Will there even be a Smokey in the new Island regime?

And with that, till next week where we will get a Richard Alpert flashback (?) episode and it is going to be amazing!