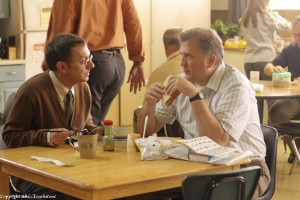 The latest Lost is our first non-Oceanic patron flash sideways episode, this time focusing on one of my favorites Benjamin Linus.  Ben Linus in the sideways world is a History teacher, at the school Locke gets a job at as we saw a few episodes back, but this isn’t a Ben and Locke episode.  No, the sideways story follows the path of Ben’s attempt at blackmailing the school’s principal for his job and his relationship he has formed with a student, Alex Rousseau.  Ben’s adoptive daughter isn’t the only old face we get to see, his dad is still alive now old and on an oxygen tank, Artz is a science teacher at the school and seemingly one of Ben’s best friends, but it is the relationship with Alex that we focus on and the fact that Ben isn’t a conniving manipulator in this world like he is on the Island; yet.  We learn early in the episode that Ben is a great teacher and one that really cares for the students, especially his young pupil Alex.  Locke gives Ben the thought that he should try and be principal over lunch and between tutoring Alex and taking care of his dad Ben begins plotting a scheme to blackmail the principal for his position.  Here is the rub though, Alex needs the principal’s recommendation letter to get into her school of choice, Yale, and the principal knows how much Alex’s success means to Ben.  When Ben makes his play, the principal holds Alex’s future hostage leading to Ben do what is best for his student; and not himself like his island counterpart.  Ben drops his new found ambition and ploy and seemingly seems to settle back into his life as it once was, to see if this sticks we will have to wait and see.  TO THE BULLETS!

-I loved how Ben wasn’t a conniving manipulator in this world, but easily fell into the role and was quite good at it on top of it; very nature vs. nurture even though it plays to both sides of the argument.

-They did a great job of aging up Uncle Rico and he did a fine job playing old as Mr. Linus.

-I am glad Ben kind of got his own episode and they didn’t go straight to the Ben/Locke shtick, though I hope we get a sideways story with the two

-the Alex inclusion seemed a bit forced, but it worked, I also wonder if we will get to see Rousseau

-Big revelation of the sideways world, Ben and Roger went to the Island and left for some mysterious reason.  So what timeline did they visit the island and what exactly happened to them?  And why did they leave the Dharma Initiative?  More fun questions to figure out.

Back on the Island Ben, Sun, Lapidus, Miles and Ilana are escaping the temple and decide to head back to the castaway’s beach.  On the way, Ilana has Miles figure out what Jacob’s last moments were as Ben claims Smokey killed him but we can safely assume that Ilana knows that this isn’t supposed to be allowed.  Miles lets the group know Ben’s death toll has ratcheted up another notch and Ilana just leads on to the beach.  In the meanwhile, Hurley and Jack run into Richard on their way back to the temple and he leads them to the Black Rock, seeming to be in quite a state of distress.  Feeling his life has been pointless and without purpose now that Jacob is dead, Richard wants to die but he can’t kill himself.  Jack volunteers to light of the stick of dynamite to blow him to bits but after he lights it he doesn’t run away, he sits down to enjoy the show.  Jack explains to Richard that he now believes he was brought here for a reason, he believes in Jacob, and he doesn’t think either of them will die there in that moment as Jacob has a plan for them.  Jack is right, the wick burned out right before the stick, infusing both of them with a sense of purpose and they head off to, as Jack says, “where it all started.”  Meanwhile back where it all started at the beach, Ilana quickly shackles up Ben and instructs him to dig his own grave.  Miles decides to come over and crack some wise and gleans a nugget on Ben that takes him a back for a moment.  Miles tells Ben that the last thing Jacob was thinking before that knife went into his heart was that “he hoped he was wrong about you (Ben).”  Next we hear Smokey coming and he shows up hiding in the bushes out of view from Ilana and offers Ben the keys to the Island if he joins his cause.  Releasing his lock and telling him that he left him a rifle 200 yards into the jungle to get the beat on Ilana; Smokey leaves Ben to make his choice which he quickly seizes.  As the two standoff in the jungle, Ben tells Ilana that he knows how she feels, that he sacrificed his daughters life for the sake of the Island, that he blindly did everything for Jacob, and that he just wanted to be left alone to join Smokey since he is the only one who will have him.  Ilana quickly replies, “I’ll take you,” and heads back to the beach, in which Ben slowly follows.  Along his arrival he seems to have completed his gradual turn away from conniving manipulator and maybe is on the path to proving Jacob right in the end. The final coda of the episode showed that “bad” man coming to the Island is, Widmore in a sub, I guess we know whose side he is on now, and he has a plan. Bullets!

-Richard’s stress level reached an all time high for the usual cool cucumber and we learned a number of interesting facts about the man; he was for sure on the Black Rock, Jacob gave him his eternal life, and that no one that is given this gift can kill themselves, I still hope this isn’t all the Richard back story we get though as I feel like the Black Rock’s arrival was the beginning of this latest run of candidates on the Island and we will get to see the beginning of this game between Jacob and Smokey

-so glad they didn’t dig up Locke for resurrection, I think that would be lame.

-Miles stole the Nikki and Paulo diamonds, will this matter in the end or just a funny little note

-Sun still has nothing to do, when will she get anything to do besides complain about Jin?

-Ilana is distraught and seems to barely be keeping it together, wonder when the tough front will crumble.

-Both sides of the battle seem to be set, now it is time for the games to begin

-Where the F is Sawyer?

-Widmore seemed to be able to get the Island pretty easily and what is his plan.

-Random thought I just had, why had Smokey been at the beckon call of the Others at times and helped them, i.e. taking out Keamy’s boys.

-Also, is Widmore on Team Smokey or his even a third party to the fight about to unfold over the Island?

Ok, next week’s preview showed nothing, but I did hear Sawyers voice so that is a plus.  But this was another great example of using the Sideways story to compliment the Island tale but supplied no hints to what that world is.  Either way, nine episodes left!