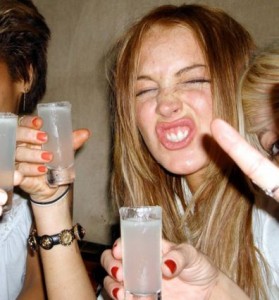 Ok, I only put slightly in the title to give Ms. Lohan the benefit of the doubt. Although, today’s news would suggest slightly would be being nice. She is suing E*Trade Securities for their commercial featuring “Lindsay the Milk-o-holic”. I’m sure if you are familiar with the commercial you are thinking, “What???”. Which is of course the correct response.

Lohan’s lawyer maintains that Lohan is a part of a high end group of celebrities who can be referred to as only one name, such as Oprah and Madonna.

Many celebrities are known by one name only, and E-Trade is using that knowledge to profit,” said Lohan’s lawyer Stephanie Ovadia. “They used the name Lindsay … This is a subliminal message. Everybody’s talking about it and saying it’s Lindsay Lohan.”

Wow, talk about an ego. This is a case of enabled narcissism at the hands of her lawyer. What law team in their right mind would take a case so vague, and frankly stupid? Most likely this will be thrown out quickly because of how frivolous this lawsuit is.  I hope E*Trade counter sues for attempting to ruin their brand based on a fast attempt to grab some cash for a washed up celebrity.

I better watch what I say or Lindsay Lohan will want to sue. However, you can’t sue someone because they use a character with the same name as yours. I can’t even fathom the type of ego it must take to think something as stupid as this would be about you. Even if it was, they are most likely covered under fair use laws.

Watch the commercial below.