Lohse Laments Rough Outing, Says, “I Could Have Given Up More Runs” 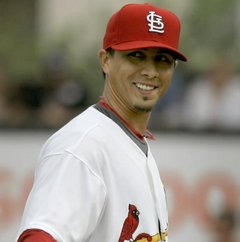 Lohse, watching yet another base hit strengthen his case for the Mike Maroth/Kip Wells "WTF" Award.

Making his first start since May, Kyle Lohse thinks he could have done more to help the Cardinals lose the game. “Next time, I’m going to do my best to give up ten [runs],” he stated. Noting he was unhappy with his contract situation with the Cardinals, he added, “I’ve got a family to feed.”

The Cardinals did almost overcome his brilliant ineptitude, putting up five runs in the bottom of the 9th before falling 9-7. Albert Pujols cranked his 30th home run, giving him at least 30 for the tenth consecutive season, every year he’s played. He’s now fifth in the league in average (.315), second in HR (30), first in RBI (86), and second in OBP (.409), SLG (.586) and OPS (.995). Everyone who was previously ready to give the MVP award to Joey Votto is now looking around nervously, saying “Just joking.” Votto may well end up winning, but Pujols is doing his damndest to make a run at a third straight MVP.

Rookie catcher Steven Hill made his debut Sunday and caught four innings and managed to crank his first career major league home run in the bottom of the ninth to start the rally. Hill’s had a tremendous season at AA Springfield so far, hitting .280 with 22 HR and 86 RBI.

With the series loss, the Cardinals now sit a game behind the Reds in the standings. They have an important series coming up against the Brewers starting tonight. Jaime Garcia‘s taking the hill. He’s been struggling a bit as of late. Whether this is due to wear and tear or just mechanical issues has yet to be determined, but Tony and Dave have to be watching the inning count.

In other news, the Cardinals managed to sign all their top picks, including Zack Cox and Jordan Swagerty, but failed to agree to terms with Austin Wilson, their 12th round pick. Wilson was projected for the first round but fell due to signability issues, as he has a full scholarship to Stanford awaiting him. Can’t really fault him for that.

Finally, the search for a third baseman continues. The Cardinals are said to be interested in Brandon Inge, who Detroit is expected to place on wavers this week. I’ve always been a fan of Inge, especially after his two errors in the 2006 World Series. Just kidding.

But not really. Inge is an above average fielder and hits for decent power (27 HR last year) and certainly would be an upgrade over Felipe Lopez, who’s adequate for a game or two but is much better suited for the middle infield.