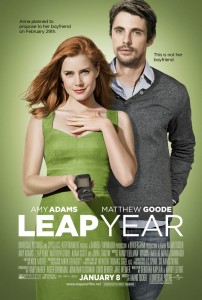 “Leap Year” is the result of a formula that we have seen much too often, lacking the originality or even chemistry to produce a successful romantic comedy that audiences would want to watch again.

In the movie, Anna (Amy Adams) stages wealthy New York apartments when they are put on the market. She has a well-to-do cardiologist boyfriend, Jeremy (Adam Scott), and everything in their life seems to be just grand. They have money, friends, and what seems to be love – but to Anna’s dismay, they do not have a marriage. While meeting with her father (John Lithgow) at a bar the night before she thinks Jeremy is going to propose, he tells her of an old Irish tradition where women propose to their boyfriends on Leap Day. She dismisses the story as rubbish, and leaves to go to dinner – where she hopes to be engaged. But when Jeremy tells her how much she means to him and hands her a jewelry box, she opens it to find diamond earrings instead of an engagement ring. The look on her face is one of utter disappointment, but their dinner is cut short before she even has a chance to say anything. Jeremy is called in on a medical emergency, and says he will leave for Dublin straight from the hospital.

Enter Anna’s plan to fly to Ireland, while Jeremy is at a cardiology convention, and propose to him on Leap Day. She throws caution to the wind, and moves forward with the plan that she considers to be her last hope. She packs her luggage, purchases her tickets, and is on her way. But a terrible storm puts her plans on hold midair, and sets the entire story in motion. Anna’s plane is forced to land in England, with no major transportation leaving in time to get her to Ireland for February 29. In a ridiculous attempt to defy mother nature and propose to Jeremy, she tries to get there by any means necessary – even taking a fishing boat across the sea in the middle of a storm that would surely crashed even finer vessels. The result is her getting dropped off in a small town before she reaches Dublin. This is where she inevitably meets a pub owner, Declan (Matthew Goode), who finally agrees to drive her because of financial troubles.

After Anna gets to Ireland, the entire film is full of completely unbelievable and ridiculous events. Every attempt that she and Declan make to get to Dublin is foiled by something terrible. Of course, at the very beginning of their trip, Declan pulls up in what is a predictable small and beat up car to drive them in. It seems like it is a key component in any comedy that revolves around traveling, to make the main characters as uncomfortable as possible. This leads to car troubles, leading to alternate means of transportation, which leads to even more alternatives. Honestly, once the storm stopped, there should have been a plethora of options that would easily get Anna to Dublin. But it seems that at every turn, they just can’t get there. And the reasons are absurd. Take for instance when they finally purchase a train ticket, and have over two and a half hours to wait for the train. Declan get’s Anna to go to a castle that is atop a hill across from them, and tells her it will only take 15 minutes to get to the top. Now granted, it takes time to walk there and back, but do neither of them have watches? How can she want to get to Dublin so badly, but can’t even manage to keep track of over 150 minutes to spare?

The worst part of the movie is the lack of chemistry between the two main characters. This has nothing to do with the acting abilities of either Amy Adams, or Mathew Goode. Both of them are fine actors – case in point being Adam’s performance in “Julie & Julia” and Goode’s in “A Single Man” only late last year. It is understandable, and excusable that in a romantic comedy about traveling that the characters are going to get into silly situations and things will go awry – but it just doesn’t work in this case. They fight, and bicker, and get into problems along the whole way to Dublin – but of course there aren’t enough reasons hitting them square in the face to dislike each other. And the ending of the film makes about as little logical sense as anyone could possibly grasp for. In the end, it looks like physical attraction conquers true love, and everything we learned in “Enchanted” can be thrown out the window.

LEAP YEAR is a D-

Leap Year is a conventional rom-com that makes all the prescribed moves and is entirely predictable; only its two likeable leads and excellent cinematography save it from being an absolute failure.

Amy Adams and Matthew Goode are just to fine of actors to be in this trivial and run of the mill premise where the only fresh thing about the picture is its Irish setting. The gimmick of this film is that Amy Adams’s character, Anna, decides to go to Dublin to propose to her boyfriend on the one day that it is apparently ok for the woman to propose in the relationship; February 29th, Leap Day. Her boyfriend is a good guy, just lacks emotional initiative, her trip to Dublin doesn’t go as planned though and she takes a very roundabout way to get there in which she runs into a handsome Irish man, Declan (Goode); guess where this is going. The two then slowly trek their way to Dublin as a number of unfortunate incidents force them to bond and get closer to each other than they hoped for.

The film follows all of the conventions of the genre and it’s a real shame they couldn’t take the film in more interesting places with such strong leads. Adams and Goode are both charming enough and fine enough actors for us to go along with most of the genre’s shenanigans, but even they can’t overcome the contrived turns at the end. This film also another victim of completely victimizing a poor undeserving sap that gets tossed aside for doing nothing of consequence. Why do the guys that get dumped not do horrible things to deserve it anymore in romantic comedies? Now all it takes to leave a guy it seems is a bit of an accent and rugged looks and women are completely ok with the stars of these films dumping their men.

I will say though, Leap Year on more than one occasion really wowed me with some of the camera work on display. Director Anand Tucker really captures the beauty of the Irish countryside and the films locations are a real love letter to the country and its nature. I wish Tucker would have taken his visual inspiration and put it into his storytelling and given us something more original. In fact, the leap the film takes with the couple getting invited to a wedding is quite the stretch and the final gag of the segment is at the expense of another innocent victim that is really upsetting to an extent.

Amy Adams is a great actress, but sadly here she plays a bit to much to type but she is still charming enough to forgive her a bit. Goode on the other hand is quite good and a blast to watch and is the most rewarding part of the film. His charisma is infectious and he is quite funny most of the time perfectly delivering some potentially dreadful jokes so that they don’t fall flat. Adam Scott successfully plays the boyfriend in question, though as an actor he doesn’t do anything terribly different than what he has before and far less funny and edgy which is when he is at his best.

In the end, Leap Year is nothing new for the genre but at least does the genre well. With that said, I don’t think we can really reward a film for going through the paces even if they do it solidly. Goode and Adams are both solid, with Goode really standing out but they can’t save the film from mediocrity. With that said, people who like this genre will probably find little to complain about and the film doesn’t fail as a romantic comedy it just doesn’t do anything new for it.

Leap Year is a D 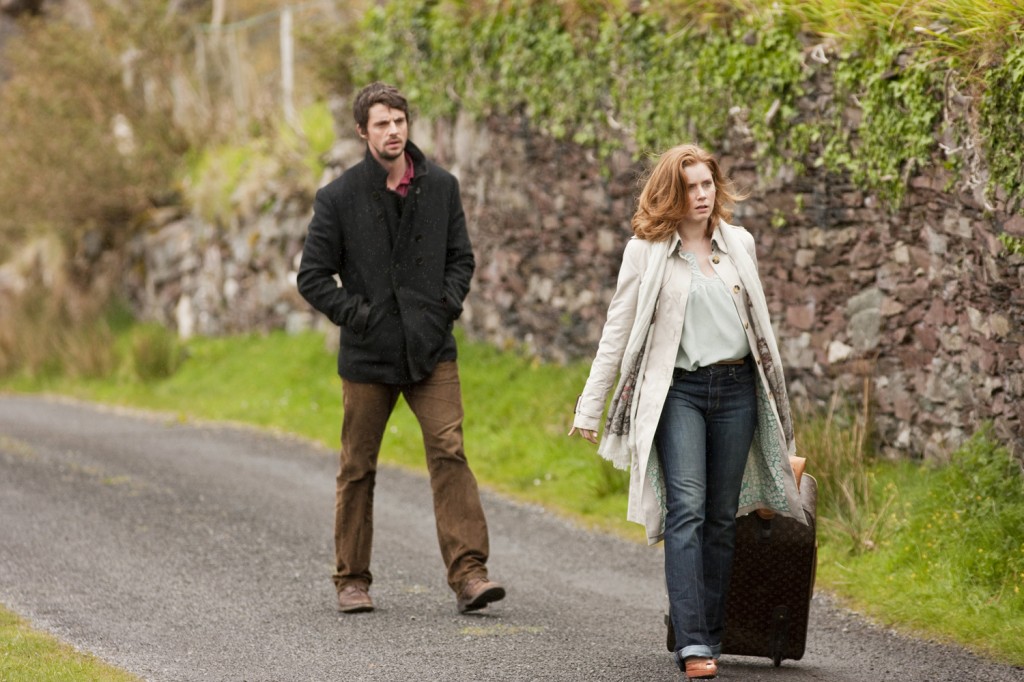