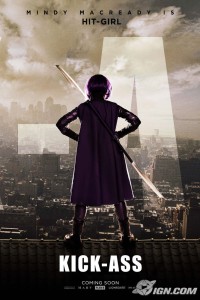 Thank god! I’ve been waiting for this trailer for a while now. Production photos have been leaking for months, and now we finally have something a bit more concrete. Now if only Mark Millar would get a move on and release a new issue every month instead of whenever he feels like it. I’m beginning to think we will see the full story of Kick-Ass when this movie hits theaters in April. I’m hoping we can at least get an ending to the current arc (which is most likely where the movie will end as well). It is amazing that this movie was in production before there were even five issues of this out on news stands. It looks like they got the feel of it right. Lets hope they keep the hyper violence, and slightly obscene viewpoints in it.

Mark Millar’s violent comic tale of wannabe superheroes is adapted by writer/director Matthew Vaughn (Layer Cake) with this Marv Films production. Aaron Johnson stars as a teen who steps out of his house one day with a mask and a painted baseball bat and starts to fight crime even though he has no superpowers. Lyndsy Fonseca co-stars as the character’s object of desire, with Nicolas Cage also appearing as an ex-cop whose hatred of a drug lord forces him to train his daughter to be a lethal vigilante. ~ Jeremy Wheeler, All Movie Guide