Kevin Smith to do ‘Red State’ Next 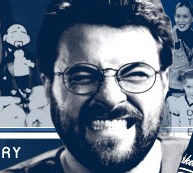 Kevin Smith’s long in the making “horror” movie has finally gotten the green light and will be his next flick before he does his hockey film, Hit Somebody.

From Shock Til You Drop:

“is definitely a 180 from everything else we’ve done including ‘Zack and Miri’ but at the same time, it’s not like a splatter film, it’s not like slasher balls-to-the-wall gore, it’s more unsettling and disturbing type of horror.”

Head to Shock Til You Drop for the full scoop!