As I enjoy the glorious weather today by looking out the window in my cubicle in a fit of pure jealousy, the countdown to opening day marches on.

For the next couple weeks, I’ll be previewing the position players and pitchers for the upcoming 2010 season, as well as possible prospects who may at some point come up during the season.

We’ll start with the catchers, considered by many (and by many, I mean me) to be the goalie of baseball, responsible for keeping the pitcher’s balls from getting all over the place. 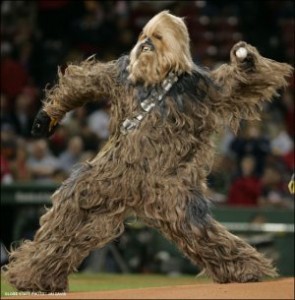 If it's this guy, though, all bets are off.

The man’s already earned his spot in Cardinals folklore with his go-ahead two-run home run in Game 7 of the 2006 NLCS. Considered by many to be the best fielding catcher in the game today, he’s finally begun to garner accolades, capturing the Gold Glove two years in a row. Look at the man. He doesn’t even need a mask. Or a glove. 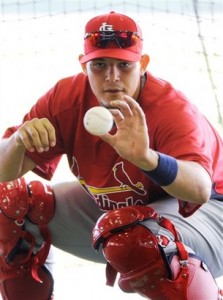 Runners are more petrified than ever to run on him, as he gunned down 22 of 54 stolen base attempts last year. He’s also picked off more runners off first than anyone in the last three years. And his offense has picked up recently, as well. Yadier’s average has hovered around .300 the last two years, and he’s become one of the most difficult hitters to strike out in the league. As long as he can stay healthy, our pitchers’ balls are in good hands. Or something. 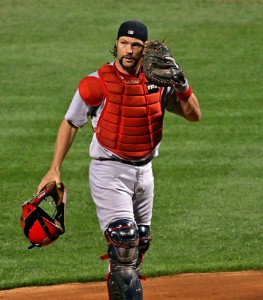 "I can't hear you. My mustache is too awesome."

Mad Dog LaRue returns once again as the backup, ready to terrorize small children and tickle the ladies with his chops.

LaRue provides good insurance in case Molina goes down. Although not nearly the defensive catcher Yadier is, he can provide some offense as well, having hit at least 12 home runs in five consecutive seasons in Cincinnati.

He also goes hunting. That might be irrelevant to baseball, though.

There are only a couple other catchers in the system that might see a late-season call-up. Bryan Anderson has long been touted as a top prospect, but he had a bit of a down year in 2009. Matt Pagnozzi, nephew of Cardinals legend Tom Pagnozzi, is seen as a solid defensive catcher, having played a few games in September, but he got as many hits as my profile on dating websites.

Overall, though, the Cardinals appear set at catcher for this season. Next post will be about first base and some prospect we have named Albert.