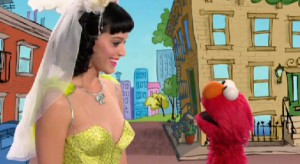 Last week there was a ton of buzz around Katy Perry’s appearance on Sesame Street being canceled from airing. After several parents complained that her top was too revealing, the segment was pulled. So what does Perry do when she appears on SNL? She wears a super revealing Elmo shirt of course! Well played.

Here is the sketch featuring the custom-trimmed Elmo wear: