Let me be a little more specific for those of you who are not familiar with what projects I am talking about.  “The Cabin in the Woods” hits theaters in April.  Whedon produced the project that has been sitting on the studio shelf with fans clamoring for it to be released for quite some time.  His second project is (in my opinion) the second biggest superhero film of the summer, “The Avengers”.  Enough talking though, let’s just get to the images. 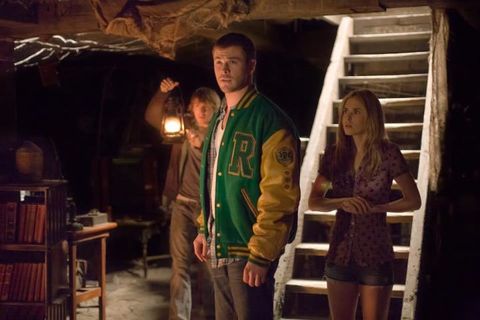 The above image is our newest look at “The Cabin in the Woods”.  It might not tell us much about the story other than at some point our teens end up in a creepy old basement, but like I said, this film is a long time coming so I am sure fans are very eager to see anything available.  The film received glowing reviews coming out of Harry Knowles’ Butt-Numb-A-Thon.  You also have to keep in mind that the audience who saw it is exactly the type of crowd that this film is geared to.  I am curious to see if this will have mass appeal.

Will the face of Thor be able to get people in the theater? 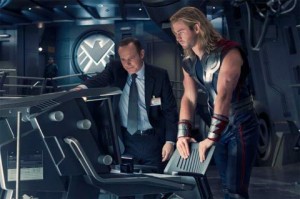 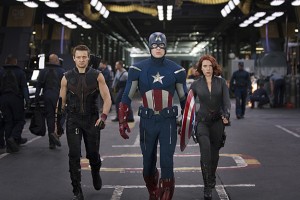 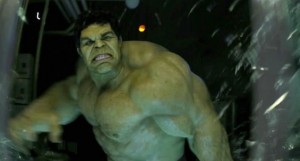 Now we have “The Avengers”.  A film that fans have been waiting to see for decades.  A film that Marvel has been planning since “Iron Man”.  Will all of their hard work and planning pay off in reviews and box office receipts?  Time will tell.  Our first image has Thor and Agent Coulson hanging out at a computer.  Coulson is probably explaining how YouTube works before Thor smashes the computer with his hammer because he can’t get his video uploaded.  Next we have Captain America, Hawkeye, and Black Widow headed out to a mission.  At least that’s my guess.  My guess is also that their mission is to hold it together and keep their cool while trying to get to a toilet as quick as possible after eating at that whole in the wall mexican restaurant up the street.  Their faces say it all.  And lastly, we got a good glimpse of Hulk.  I honestly can’t help but laugh at fans for speculating on what exactly Hulk will look like in the finished film.  He is giant, green, and muscular.  I feel like there is not too much artistic liberties to take there.

I personally am more excited about “The Cabin in the Woods” (just in case you couldn’t tell from all of my smartass remarks to “The Avengers” photos).  Not that I think “The Avengers” will be terrible, I just think that it will not be THE EVENT that some fans are claiming it will be.  What’s your opinion?  Which film are you more excited to see?